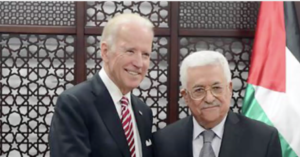 So far, their efforts have had little impact, the sources said.

US President Donald Trump has recognized Jerusalem as Israel’s capital, moved the US Embassy to the city, and made peace proposals envisaging Israeli sovereignty over parts Judea and Samaria.

The ‘Beginning of the End: President Trump tells Palestinian serious message in Bethlehem, ‘The Incitement must end.” – Screenshot: White House:IsraelandStuff.

“If Mr Biden is elected in November, we hope that it will be a totally different dynamic,” Palestinian Prime Minister Mohammad Shtayyeh said last week during a virtual conference with the Carnegie Endowment for International Peace.

Biden is the presumptive Democratic challenger in November’s election. He is on record as challenging plans by Israeli Prime Minister Benjamin Netanyahu to extend sovereignty to Jewish settlements.

The Trump administration’s newly unveiled Vision for Peace stipulates that Washington will endorse an Israeli decision to apply sovereignty to about 30% of Judea and Samaria as long as Israel commits to holding good-faith negotiations with the Palestinians and avoids construction in certain areas that could become part of a Palestinian state. That state will only be established four years after negotiations begin and only if the Palestinians fully renounce terrorism and carry out major reforms, and only if they are no longer considered a threat to Israel.

“Biden opposes any unilateral action by either side that makes the prospects of a two-state solution less likely – including annexation, which Biden opposes now, and would continue to oppose as president,” campaign spokesman Michael Gwin said in a statement for Reuters.

List of Trump decisions to be rectified by Biden

Gwin did not address what action Biden might take if he were president and Israel applied its sovereignty on contested land.

Netanyahu’s proposed move, under Trump’s peace blueprint, has been criticized by Arab and European nations.