Historical Analysis Has Palestinian Refugees of 1948 Less Than 300,000 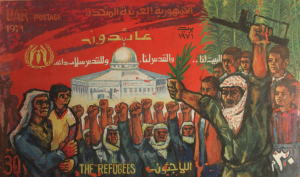 Fraudulent claims were made since UNRWA refugee camps were better than standard housing, so many non-refugee residents of Judea-Samaria & Gaza declared themselves refugees in order to gain access to free food, medical & educational benefits.

Most serious students of the history of Palestine would accept that the number of Arab refugees from Israel during and after 1948 claimed by Arab and UN sources—some 600,000 to 750,000—was exaggerated. It is very easy to refute that estimate and many have already done it.  Yehoshua Porath , Israeli historian & professor emeritus of Middle East history.

It is a common misconception that around 650,000 Palestinian refugees were created because of fighting that took place in 1948. But a closer look at both the population data and statements made by UN officials at the time suggest that the true figure is much lower, possibly as low as 270,000.

The conventional figure of 650,000 cannot be true for more than one reason. Firstly, there were fewer than 660,000 Arabs living in the part of Palestine that eventually became Israel; and secondly, UNRWA (the United Nations Relief and Works Agency), either through incompetence or deliberate manipulation, handed out multiple identity cards to the same persons, some of whom were not refugees at all but permanent residents who took advantage of the aid offered by UNRWA. This is attested by UNRWA officials.

Before taking a look at UNRWA’s role in the invention of the Palestinian refugee problem, it is worthwhile examining the population data of Eretz Israel/Palestine prior to the 1948 Arab-Israeli War.

The Statistical Abstract of Palestine in 1944-45 set the figure for the total Arab population living in what would become the Jewish-settled territories at 570,800. Another set of figures based on a census taken in 1944 suggests there were 696,000 Arabs living in what would become Israeli-controlled territory. Tsvi Misinai, an Israeli researcher and historian, believes the figure to even lower. He believes that prior to the 1948 war, there were 390,000 Arabs living in areas that would fall into Israeli hands. (None of these figures include the number of Arab Palestinians residing in east Jerusalem, Gaza and Judea-Samaria. Figures vary, but the number of Arabs in those areas was probably 600,000, which brings the total number of Arabs residing between the Jordan River and the Mediterranean Sea to 1.2 million).

According to Misinai, there were in excess of 120,000 Arabs inside Israel’s borders by the end of the war, although most commentators believe the figure to be 160,000 or 170,000. (The discrepancy becomes less glaring when Israel’s repatriation of 20,000 Palestinian Arab refugees from Jordan is taken into account). This means that the number of Palestinian Arabs displaced from areas that came under Israeli control cannot be higher than 270,000.

Of the 270,000, most had ended up in neighbouring Arab countries, with the rest having fled to Judea-Samaria and Gaza. Around 4,000 had voluntarily moved from west Jerusalem into houses abandoned in east Jerusalem. During the course of the war, 77,000 Arabs (mostly Bedouin) returned to their homes in what would become Israeli territory. As the war went on, another 81,000 Palestinians fled, 24,000 of which had already fled and returned, only to flee again. By the war’s end, there were 270,000 Palestinian Arabs who had lost their homes and/or their land.

At first glance, this seems a rather low figure. A report submitted by the UN mediator Count Folke Bernadotte suggested that the number of Palestinian refugees totalled 330,000. Other contemporary reports put the number at around 424,000. Either way, it is statistically impossible for there to have been more than 430,000 genuine Palestinian Arab refugees from the 1948 war. This is the view of Dr Walter Pinner, who bases his figures on reliable census data carried out in the mid-1940s.

So we have a situation where no less than 270,000 and no more than 430,000 Palestinian refugees were created by the 1948 war. Misinai’s suggestion of 270,000 can be attributed to his rather low starting figure of 390,000 Arabs who resided in pre-state Israel. Perhaps if one takes into account the Arab migrants and citrus farm workers who had gone back to their country of origin, there may be a case for a final figure of 270,000. Plus, a reliable study undertaken in the mid-1960s suggests the figure of 270,000 may be close to the mark (more on this later).

One explanation is the attested fact that in the aftermath of the conflict, refugees were counted more than once. In order to receive extra funding, many refugees identified themselves twice before UNRWA officials. As a result, they received more than one identity card. One of the camp workers in Lebanon stated, “We try to count them, but they are coming and going all the time; or we count them in Western clothes, then they return in aba and keffiyeh and we count the same ones again.”

This was not the only fraud committed by the refugees. Another was the concealment of natural deaths so that families could continue to collect the deceased person’s food. Births, however, were always registered. In 1951, UNRWA reported that “it is still not possible to give an absolute figure of the true number of refugees as understood by the working definition of the word.” A reason given by UNRWA for the erratic data was that the refugees “eagerly report births and … reluctantly report deaths.” According to the July 23 1955 edition of the Cairo-based Mideast Mirror, “There are refugees who hold as many as 500 ration cards, 499 of them belonging to refugees long dead…. There are dealers in UNRWA food and clothing and ration cards to the highest bidder.”

The situation in Jordan was especially difficult because western Jordan was already populated by Arab Palestinians, so distinguishing a refugee from a non-refugee was particularly arduous. An UNRWA official noted that the Jordan ration lists alone “are believed to include 150,000 ineligibles and many persons who have died.” A similar situation arose in Lebanon. In a 1950 report to the UN General Assembly, the director of UNRWA noted that “many Lebanese nationals along the Palestinian frontier habitually worked most of the year on the farms or in the citrus groves of Palestine. With the advent of war they came back across the border and claimed status as refugees.” UNRWA conceded that up to 129,000 Lebanese workers may have falsely claimed Palestinian refugee status.

In fact, this developed into a widespread trend. Because the UNRWA refugee camps were better than standard housing, some non-refugee residents of Judea-Samaria and Gaza declared themselves refugees in order to gain access to food, as well as medical and educational benefits. Many permanent residents of Judea-Samaria and Gaza came to carry both an UNRWA refugee card that had the address of a refugee camp and a regular ID card with their actual identity and address.

Another problem was the unrecorded movement of peoples, especially the Bedouin tribes who moved between Gaza, Israel, Jordan and Lebanon, thereby increasing multiple registrations. Even the UN acknowledged that 15,000 Bedouins were actually non-existent, that they were fictitious persons or people already registered. In the words of UNRWA, the movement of people introduced “a double source of error into any estimates of the number of persons who could have become refugees.”

By 1950, the UN disclosed that it was “not possible to give an absolute figure of the true number of refugees as understood by the working definition.” According to a report, the percentage of error in the UN statistics was “possibly as much as 50 per cent and represents a serious operational difficulty.”

Nonetheless, the UN kept revising its figures upwards because it pursued a maximalist position on who was a refugee, which ranged from a “needy person” who “has lost his home and means of livelihood” to “persons whose normal place of residence was Palestine between June 1946 and May 1948.” Even refugees who still had a house but had lost some or all of their land were considered refugees. In addition, Arabs who had settled in Palestine illegally prior to 1948 were also given refugee status. No wonder the figures were artificially high.

In 1966, Dr. Walter Pinner identified a huge number of fraudulent refugee claims. Basing his findings on  UNRWA’s own reports, he discovered that 484,000 refugees were Arabs from western Jordan and Gaza Strip; another 117,000 were unrecorded deaths; 109,000 were people who had been resettled in 1948 and were no longer refugees; and a further 225,000 had subsequently settled elsewhere and become self-supporting. After subtracting the inauthentic claims, he concluded that there were 115,000 “old and sick” refugees, and 252,000 “other unsettled genuine refugees,” totaling 367,000 legitimate refugees as of 1966.

Once the natural rate of increase between 1948 and 1966 has been subtracted, the number of genuine Palestinian refugees from 1948 cannot be much higher than 300,000. In which case, Tsvi Misinai’s figure of 270,000 may not be far off the mark.

Significantly, UN Secretary General Dag Hammarskjold did not refute Dr Pinner’s findings, nor did he issue any corrections to Dr Pinner’s figures. He did, however, acknowledge receipt of Dr Pinner’s work, so it cannot be claimed that the UN wasn’t aware of his analysis. It is probable that the UN, at least in private, agreed with Dr Pinner’s findings but did not want to admit that UNRWA had been defrauded of millions of dollars.

The Arab states themselves have been major players in the refugee fraud. Greed was one motivating factor because UNRWA money was, in effect, free money. In 1961 UNRWA director John H. David admitted that Arab countries overstated their refugee figures in the 1950s to get more funds. But the refugee crisis was useful for another reason: It was a way of exerting international pressure on the State of Israel to repatriate the so-called refugees, thereby demographically destroying the Jewish state. This explains why the Arabs didn’t permanently rehouse the refugees in Judea-Samaria and Gaza, which were under Jordanian and Egyptian control respectively between 1948 and 1967.

The sordid history of the Palestinian refugee situation means the Israeli government must be extremely wary about compensating or repatriating Palestinians who claim to be refugees. Many of them are frauds or the descendants of frauds. If the Israeli government does decide to compensate or repatriate some of the refugees as part of a peace deal, then a detailed investigation needs to be conducted to ensure that only genuine claimants are assisted. In return, a wider compensation package is needed in which the descendants of Jews who lost their homes, savings and livelihoods in Nazi Europe (not just Germany) are compensated, and the Jews forced from Arab lands in the 1940s and 1950s are likewise recompensed. In addition, there needs to be some recognition that many Jews were killed and displaced in the 1948 war – a war instigated by an alliance of several Arabs nations to destroy the Jewish homeland.