Want to defend Israel? – Here’s a lesson in ‘Hasbara’ #DigitalDiplomacy

A new app ‘arms’ thousands of motivated civilians worldwide, defending Israel’s image online, and now you too can lend a hand in the never-ending battle of lies, distortions and the demonization of the only Jewish State.

In November 2012, while the IDF was fighting Operation Pillar of Defense in the Gaza Strip and residents in Tel Aviv, Rishon Lezion and Jerusalem suffered rocket fire on their city for the first time, Yarden Ben-Yosef, 29, was a second year law and government student at the Interdisciplinary Center Herzliya (IDC).

During the operation, he encountered a lot of online hostility against Israel, and felt he could no longer sit idly by. He recruited several of his friends from the International School at the IDC, and together they formed a makeshift operations room, where they started commenting on online articles that were slandering Israel and defending the country’s name and actions.

Two years later, during Operation Protective Edge, Ben-Yosef got the team back together and reopened the operations room, where they all—completely voluntarily—lent a hand in the online war of hasbara (public relations).

“People learned of our initiative by word of mouth, then it was also reported on by Yedioth Ahronoth, and more and more students asked to join the effort,” Ben-Yosef remembers. “We had about 1,000 volunteers, most of them students from the IDC, who created pro-Israel PR content in 35 different languages, reaching some 40 million web users.”

‘Not just during war time’

The intensive around-the-clock work, which continued throughout the entire duration of the operation, gave Ben-Yosef the feeling this was a battle field that has been neglected.

“After what I’ve seen and experienced during Pillar of Defense and much more during Protective Edge, I felt like our work can’t just be done at times of emergency, such as wars and military operations,” he explains. “I realized something had to be done during peacetime as well—if we even have such a thing as peacetime—and we needed to establish the first pro-Israel online community.”

The project’s main headquarters are located at the IDC in Herzliya, and over the last year three similar centers of operation have been set up in Jewish communities in Boston, New Jersey and Philadelphia.

“It started completely spontaneously,” Ben-Yosef recounts. “After Protective Edge, we realized we can’t just neglect the online battle field, so we started working from the operations room on a regular basis. We had a database of student volunteers from dozens of countries, and it became more and more organized. We started setting up departments: One department created pro-Israeli marketing content, another department found and marked online articles that required our attention, and a third department dealt with finding and reporting pages that incite against Israel.”

About two years ago, at a conference in the US where he spoke about the project, Ben-Yosef met Shoham Nicolet, an American hi-tech man who lives in Los Angeles, where he founded the Israeli-American Council. Nicolet was impressed by the students’ fighting spirit and decided to join the effort. And this is how the Act.il project came to be.

The project coordinates between the different operation centers and has even launched an app earlier this month meant to recruit millions around the world for one giant powerful internet-based task force working to defend the State of Israel.

The new app—which appears to be the newest game changing weapon in the fight for Israel’s image in the world—is already a smashing success. Within only two weeks, it was downloaded by over 6,000 people in 27 countries around the world, with the youngest user being a 14.5-year-old girl and the oldest being a 72-year-old man. Every 3.5 minutes, a shared task is completed with the help of the app.

“In the months before the app’s launch, we ran it a pilot among a group of some 800 students, most of them Americans,” Ben-Yosef says. “Even then, during the pilot, we realized the power behind the group tasks that could be done using the app. During the pilot period, we were able to remove 2-5 inciting pages or videos every week. We’re working with the IDF and the Shin Bet, who are giving us information on such inciting content, and even they couldn’t keep us with how fast we were getting things removed.”

It’s genius just how simple the idea behind the app is. “Companies, such as Facebook, remove content following reports from the community,” Ben-Yosef explains. “If there is only one person reporting it, he usually gets told by Facebook the content doesn’t meet the criteria for removal. If 300 report it—the content is removed immediately. As soon as content inciting against Israel is posted online, we send a message through the app and all of its subscribers immediately report it.”

This fight, Act.il’s operators explain, is not government-supported and has no political affiliations. Anyone who wants to help can simply download the Act.il app, which is available to all smartphone users worldwide, and after a short registration process take join the international community that is fighting against attempts to delegitimize Israel and the lies being spread by the BDS Movement. 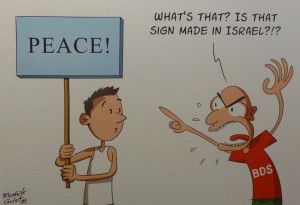 Ben-Yosef and the students working alongside him at the Act.il headquarters can provide plenty of examples of content that was quickly removed thanks to the app.

“There was a post comparing Jews to cockroaches,” he remembers. “We put it on the app, the users protested against it, and within three days it was deleted.

“In another instance, an Israeli lecturer had his microphone cut off at a university in Minnesota. We put a petition online that immediately garnered support from all of the app’s users, with 400 of them also sending letters of protest to the president of the university, leading him to open an investigation into the case and discipline the students involved.”

The operations room at the IDC is run by 30 students from central Israel as part of an internship, along with thousands of volunteer students, some of whom physically arrive at headquarters while others participate online. A giant Israeli flag is on the wall, there’s also a world map and three TV screens showing international news channels such as Fox News, CNN and France24 non-stop.

“This is a very organized system, in which everyone has a defined role,” explains Or Briga, 27, a third year student of law and government. “There’s a training center to instruct all of the new recruits both in Israel and abroad. There are online people who actively create content—editing, filming, etc. And there are field people who collect information about problematic content, raise ideas for our own campaigns, and check different reports coming in.”

According to Briga, a lot of thought put into the project’s activities, and the work doesn’t just focus on removing negative content but also on promoting positive content.

“For example, we asked the users to send us videos of all sorts of sports they’ve done in Israel,” he remembers. “We got some incredible stuff—people skiing at a very advanced level on the Hermon Mountain, surfing, paragliding, skateboarding and snowboarding. We edited it together into a spectacular video and spread it on Facebook with the help of the app’s users. Without any logos. A message can be more easily conveyed when it’s not affiliated with anyone. Only those who watched the video until the end and enjoyed it saw its ending slogan: ‘Hey, it’s all in Israel.’”

The project also gets requests for help from Jewish students abroad who find themselves having to defend the State of Israel.

“Students from the University of California (UC), where there are a lot of anti-Israel activists, came to us for help,” Briga says. “We organized a joint campaign, in which we opened Skype chats at the IDC and at UC campuses and we let random students just sit down and have a conversation with someone from here. Incredible dynamics were created. After that, we edited the video from these Skype conversations and spread them to students at UC, to show the ‘Israeli demon’ is not so bad.”

Liel Barazani, 23, a third year communications student, returned from New Jersey last month, where she accompanied and assisted the Jewish community there to open a similar center of operations.

“You can’t start a strong and effective online community without a community of real people working behind it,” Ben-Yosef explains.

Nicolet, the head of the IAC, was visibly excited as he spoke to the team at the new operations room via Skype. “Imagine 20 more rooms like this, not just in the United States but all over the world,” he enthused. “This isn’t just a virtual community, but something real with incredible strength.”

“As part of the fight against delegitimization and calls to boycott Israel, Minister Erdan set a clear policy: we must unite the pro-Israeli online world and bring everyone to work together against this challenge, with the understanding our strength is in our unity,” says Tzachi Gabrieli, the deputy director-general at the Strategic Affairs Ministry, who also manages the campaign against delegitimization.

“Act.il is an example for a platform where the power of the community is meaningful, effective and is already making a change.”

In cooperation with the Strategic Affairs and Information Ministry.