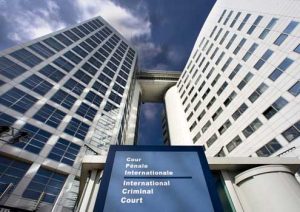 Despite the fact that Int’l Criminal ‎Court ‎Chief Prosecutor Fatou Bensouda has yet to decide ‎whether the court has any jurisdiction over the Israeli-Palestinian conflict, 3 ICC judges urge “victims of the situation in Palestine” to come forward, to facilitate investigation against Israel.
• Jerusalem officials: Move demonstrative of predisposed “strong anti-‎Israel policy.”

Jerusalem has reportedly filed a formal protest with ‎the ICC for launching a campaign that actively urges the “victims of the situation in Palestine” to ‎seek legal action against the Jewish state. ‎

The International Criminal Court (ICC) in the Hague, a frequent destination for Palestinian officials.

This highly unusual step casts doubt on the court’s ‎ability to be impartial when dealing with issues ‎pertaining to Israel, Jerusalem officials said.‎

The three, members of the ‎pretrial chamber dealing with Palestinian allegations of Israeli war crimes, ordered the ICC’s ‎Registry “to establish, as soon as practicable, a ‎system of public information and outreach activities ‎for the benefit of the victims and affected ‎communities in the situation in Palestine.” ‎

The three said they sought to ‎establish “a continuous ‎system of interaction ‎between the court and victims, ‎residing within or ‎outside of Palestine.‎”

‎”Victims play an important role in the court’s ‎work,” they said. “Victims have the right to be heard and ‎considered, ‎at stages of the proceedings determined ‎to be ‎appropriate, and the court has the duty to ‎‎effectively enable them to exercise this right.”

This move, which Israeli officials, including ‎Justice Minister Ayelet Shaked, have deemed “very disturbing,” came despite the fact that ICC ‎Chief Prosecutor Fatou Bensouda has yet to decide ‎whether the court has any jurisdiction over matters ‎related to the Israeli-Palestinian conflict.‎

Israel is not a signatory to the Rome Statute from ‎which the ICC derives its power. The ‎Palestinian Authority, which joined the ICC in April ‎‎2015, has not been recognized by the United Nations as a state, meaning the ICC cannot ‎exercise its jurisdiction over the regional conflict.

In a stern message, Israel noted that the move was unacceptable and that the court did not have the authority to implement it since Bensouda has yet to rule on whether ‎there is a basis to investigate Palestinian claims ‎of war crimes.

‎”The judges are completely ignoring the fact ‎that ‎the court lacks the jurisdiction to rule on the Israeli-Palestinian conflict. Their eagerness to launch such an unusual appeal casts serious doubts over the court’s ability to fairly confront any matter relating to Israel,” a senior Israeli ‎legal ‎official told the Hadashot ‎news edition on Tuesday.‎

Channel 10 News quoted a senior Israeli diplomat as ‎saying the government was “shocked” to learn of the move.‎

He said that in private conversations in July, top ‎Jerusalem officials described the move as “unprecedented,” ‎saying it was practically unheard of for the ‎pretrial chamber to actively reach out to victims in ‎a case that has not yet advanced to the stage of an ‎investigation.‏

The move has led Israeli officials to lambaste the ‎ICC for being as biased against Israel as the U.N. ‎Human Rights Council.‎