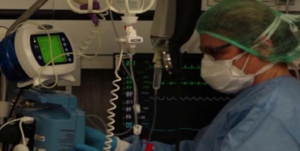 According to preliminary data provided by the Haifa-based company, not only have all six of the critically ill coronavirus patients that were treated survived, but four of them showed improvement in respiratory parameters.

Six critically ill coronavirus patients in Israel who are considered high-risk for mortality have been treated with Pluristem’s placenta-based cell-therapy product and survived, according to preliminary data provided by the Haifa-based company.

The patients were treated at three different Israeli medical centers for one week under the country’s compassionate use program and were suffering from acute respiratory failure and inflammatory complications associated with COVID-19. Four of the patients also demonstrated failure of other organ systems, including cardiovascular and kidney failure.

Not only have all the patients survived, according to Pluristem, but four of them showed improvement in respiratory parameters and three of them are in the advanced stages of weaning from ventilators. Moreover, two of the patients with preexisting medical conditions are showing clinical recovery in addition to the respiratory improvement.

“We are pleased with this initial outcome of the compassionate use program and committed to harnessing PLX cells for the benefit of patients and healthcare systems,” said Pluristem CEO and president Yaky Yanay. “Pluristem is dedicated to using its competitive advantages in large-scale manufacturing to potentially deliver PLX cells to a large number of patients in significant need.”

Pluristem’s PLX cells are “allogeneic mesenchymal-like cells that have immunomodulatory properties,” meaning they induce the immune system’s natural regulatory T cells and M2 macrophages, the company explained in a previous release. The result could be the reversal of dangerous overactivation of the immune system. This would likely reduce the fatal symptoms of pneumonia and pneumonitis (general inflammation of lung tissue).

Biologists work in a laboratory at Pluristem Therapeutics Inc. in Haifa . – Photo: Linkedin

Pluristem plans to apply for initiation of a multinational clinical trial for the treatment of complications associated with coronavirus, the release said, noting that it will no longer report on its compassionate use trials but rather on the status and progress of its contemplated clinical trial.

The company is already in discussions with regulators in the United States and Europe to “define our clinical strategy for COVID-19,” Yanay added.