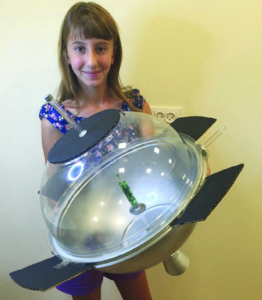 Roni Oron, from Ramat Hasharon, Israel, won the “Satellite is Born” competition hosted by the Israel Space Agency, with a satellite that has the potential to create oxygen in space.

A 13-year-old Israeli girl has invented a system for the production of oxygen in space, the Hebrew youth paper Ma’ariv L’Noar reported on Thursday, along with an interview with the budding teen scientist from Ramat Hasharon.

Roni Oron poses for a picture along with astronaut Sunita Williams. – Photo: Family

The recent winner of the “Satellite Is Born” award from the Israel Space Agency, Roni Oron developed BioSat “to solve a problem for astronauts trying to prove that life on Mars is possible.”

Oron said her satellite is “built like a large bubble on one side of which there is a mirror and the other is transparent, enabling the penetration of sunlight. In the middle there is a capsule, which will

be made of a membrane through which air can pass but water cannot. Inside of it there will be water and algae, and outside there will be carbon dioxide. Through a process of photosynthesis, the satellite will produce oxygen. There will be additional mirrors inside the satellite that will enable sunlight to reach the capsule, but not by direct radiation, which would harm the algae.”

“My father, an orthopedist, was very happy when I began my research,” she said. “From my mother I learned the wisdom of looking at life creatively.”