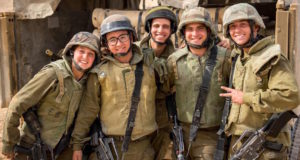 Majority of the new IDF recruits, new immigrants and foreign volunteers, come from North America, followed by 43 volunteers from France, 16 from the UK.

The 158 new recruits comprised of 120 male volunteers and 38 females, the majority from North America with 69 volunteers (45%) followed France with 43 volunteers (30%).

Gathering of the 158 volunteers from 18 different countries arrive in Israel to volunteer for the IDF. – Photo courtesy: Israel’s Defense Ministry

According to the Defense Ministry, the number of volunteers from Australia has “quadrupled” since last year with eight volunteers, and the number from Britain doubled with 16 volunteers this year. Another four arrived from Canada, three from Belgium, two from Brazil, two from South Africa and two from India.

Udi Dror, who heads the ministry’s division responsible for volunteers, said the majority of graduates from the program, which is in its 18th cycle, join combat units.

Congratulating the new recruits’ decision to join Israel’s military, he said the “unique program is gaining resonance and its influence is evident in the IDF absorbing the graduates. We are making great efforts to strengthen the ties of Diaspora Jewry with the State of Israel and to encourage their enlistment in the IDF and prepare them for a meaningful combat service.”

Ahead of their recruitment, the volunteers will undergo physical and mental preparation for their induction into the IDF. This includes field trips throughout the country to heritage sites and museums, meetings with IDF officers, and Hebrew language classes.

The program will allow new recruits to learn about the IDF, as well as the nature and conditions of their service, with an emphasis on their rights as individual soldiers.

According to the ministry’s statement, the IDF and the Defense Ministry’s Social Defense Branch decided four years ago to establish preparatory programs for new immigrants and foreign volunteers, as training was found to be critical for integrating new recruits into service and was even a condition for the recruitment of foreign volunteers.

“The decision to leave a comfortable life, family and friends and to come to Israel to enlist in the IDF is not obvious,” she said. “Your contribution to the State of Israel by increasing national strength is tremendous and admirable.”

Landver added the ministry is “proud” to provide new recruits with an assistance package which they can use after they are released from the army.

“We at the Ministry of Immigrant Absorption will do everything to make you feel at home here,” Landver said.

During their service, lone soldiers are entitled to assistance from the state, including monthly living stipends, discounts on electricity bills, exemption from municipal taxes, rental assistance or lodging provided by the Aguda Lema’an Hachayal (Soldier’s Welfare Association) and extra financial support for combat soldiers.

Once they complete their military service, lone soldiers receive NIS 12,000 from the army over the course of one year, the option to live in a Beit Hachayal for three months, and preparation and financial help to complete matriculation and psychometric exams.

But the annual State Comptroller’s Report released in March found the IDF has not fully examined the needs of lone soldiers, with major deficiencies in terms of housing solutions, donations to the IDF for lone soldiers, ties between the IDF and nonprofit organizations, and assistance given to lone soldiers following military release.

“After their release from the military service, Israeli society faces a national mission to facilitate the integration of these lone soldiers into the civilian sphere,” the report read. “It is therefore appropriate that inter-ministerial national staff work, led by the Director-General of the Ministry of Defense, be held in order to advance a strategic plan aimed at absorbing lone soldiers in society after their release.”

So, you’re thinking about joining the IDF? Why not?

See if you qualify!

IDF Volunteers  or
Sar-El (for all ages)