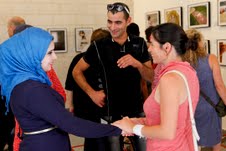 Last Saturday around 1,500 people, including over 200 Palestinian men women and children, attended an all-day event in Tel Aviv, “Neighbors: Women Creating Reconciliation.” The PCFF’s women’s group, established eight years ago, facilitated the event and showcased creative projects that women from both sides had completed together including homemade jam, a photography exhibit, handmade books, embroidery and more.

For many of the Palestinian attendees, this event marked their first journey past the green line. “After 14 attempts to get a permit to visit the beach, today, for the first time the Israelis let me visit the beach,” said 21-year-old Aseel Jafari from Bethlehem. “It was a lifelong dream of mine to see the sea.” In the past, Jafari was against her parent’s involvement in the PCFF. Meeting Israeli civilians, who were not as dangerous as she expected, has radically changed her mind. Her experience is reflective of many others.

“At first even I could not hold myself back, when I first met with Israelis,” said Bushra Awad, a mother of eight from Hebron. One of her teenage sons was killed in 2008. “I couldn’t look at their faces. It was extremely hard, exhausting.” But Awad did not give up, because she believed her children’s future depended on reconciliation. “After I continued to meet with Israeli women, I was able to convince a few family members to visit the forum. Not all of them, but a few, slowly.” Awad said she gained two things from the PCFF’s women’s program: a network of mothers that share and understand her experience, “and the idea that there are humans on the Israeli side.”

Participating in reconciliation can cause conflict within the families involved. Such was the case with Lara Brieghielh, a 21-year-old from Hebron who calls herself the daughter of the forum.

‘The next generation learns from us’

Over 10 years ago, Brieghielh’s uncle was killed in front of her eyes. “They shot my uncle up close. His skull blew open,” said Brieghielh. “Then IDF soldiers gave me a bucket and told me to pick up his brains, to clean the floor. After that my father helped start the PCFF.” She has continued participating in the group’s programs even after her father left. “There is a lot of social pressure,” she explained. “My father left the country.” Now Brieghielh can’t imagine her life without the PCFF. “Through the PCFF I have a network of women who understand what war can do to a family, the pain I live with every day.”

Israeli participant Merav Yaron-Barniv expressed that at first she was equally apprehensive about crossing the green line. “I was very scared to go to the West Bank,” said Yaron-Barniv. “But I trusted my partners from the PCFF. They welcomed me into their homes.” According to Yaron-Barniv, fear and government restrictions on movement are some of the greatest obstacles they face. “It’s difficult to get permission to visit each other,” she said. “There’s a lot of bureaucracy. And it’s even harder for the Palestinians to come here.”

In particular, Yaron-Barniv admires a leader of the women’s group, Aesha Aqtam from Nablus. On September 27, Aqtam’s son was injured at a checkpoint. She still brought her family to Tel Aviv the next day to promote peace at the PCFF’s women’s event. “My mother is here to see my event for the first time, how I meet with Jews,” said Aqtam. “She’s supportive.” Aqtam agrees that checkpoints are one of the biggest obstacles to peacemaking. “Ending the occupation is the best way to empower Palestinian women,” she said. “But even if the IDF kills all my children, I won’t stop working for peace. We both have the right to live and not to leave.”

Aqtam believes Palestinian and Israeli women decide the future. “I’m a mother of six and a teacher,” said Aqtam. The next generation learns from us.”

According to Yaron-Barniv, the best way to amplify women’s voices in the peace process is from the ground up. “Women’s leadership is not only about the number of women in the Knesset,” said Yaron-Barniv. “Look around, there are already women organizing and promoting reconciliation.”