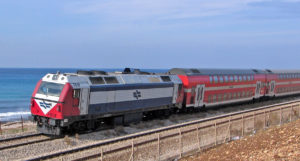 Trains are set to carry passengers and cargo between the Israeli Mediterranean coast and Jordan, or more optimistically—if there is a peace agreement between the countries—all the way to Iraq and Saudi Arabia as well.

Currently, with the Syrian sea ports closed, a large amount of cargo makes its way on the Israel-Jordan line via trucks. The planned rail project would significantly decrease the need for trucks which are a hazard on the roads.

A new cargo terminal would need to be built at the border crossing for freight trains; currently, cargo arriving in Israel is transferred from Jordanian to Israeli trucks that then transport it to ports in Haifa and Ashdod.

The cost of the project—including 15 kilometers of double tracks, bridges and tunnels—stands at NIS 2 billion. The challenging terrain in the area would require unique engineering solutions.

Israel Railways set up a planning team to oversee and advance the project. With its completion, the train will serve as a land bridge facilitating efficient, uninterrupted transportation between East and West.

“The Emek Railway (through the Jezreel Valley) will serve as a regional transit corridor for cargo between Europe and the Middle East and will connect the Mediterranean Sea and be a bridge of peace,” said Transportation Minister Yisrael Katz. “The line improves the connection to Jordan and to the Persian Gulf beyond and will serve as an alternative to the sea route, which circles the Arabian Peninsula.”

Katz continued, “My vision to connect Saudi Arabia and the Gulf states and Jordan to the Haifa port and the Mediterranean Sea will transform Israel into a center for naval transport and strengthen the Israeli economy. This is a realistic vision that I am advancing in partnership with the American government and other relevant international bodies.”

The economic potential involved in increased trade between Israel and the Gulf states lends strategic value to the project and increases the likelihood for economic peace in the Middle East.

Already, a temporary terminal was constructed at the Beit She’an railway station in preparation for a permanent terminal to be constructed a short distance away near Sde Nahum. The terminal will process cargo traveling between Jordan and Israeli sea ports.Minister Katz said that the construction of the train tracks for cargo heading to the Haifa port and the center of the country will decrease the number of trucks on the road, which will improve safety, diminish the number of accidents involving trucks and reduce traffic congestion.