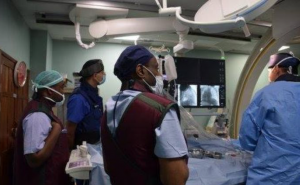 After years of sitting in a wheelchair, unable to stand on his feet and in severe respiratory distress, 4 yr-old Sliman was finally diagnosed correctly, and after the removal of a chest growth undetected in several Gaza hospitals, Sloman is now walking and breathing easier.

A four-year-old boy from Gaza is able to walk after undergoing complex surgery at Hadassah-University Medical Center, in Jerusalem’s Ein Kerem, to remove a tumor from his chest.

Born with a number of birth defects in his spine and chest, Sliman was taken during his short life to several hospitals in Gaza where unsuccessful attempts were made to diagnose his condition. He had been operated on in the past to reduce congestion on the cervical spine due to the lack of development of the vertebrae, but his clinical condition did not improve due to the lack of proper treatment for the other problems he suffered.

After years of sitting in a wheelchair, unable to stand or stand on his feet and in severe respiratory distress, Sliman was taken a few weeks ago by a Red Crescent ambulance to Hadassah for surgery.

Prof. Uzi Yizhar, head of the chest surgery unit, said that a significant congenital tumor had developed, causing pressure on the spinal cord and lung that led to recurrent pulmonary infections and chronic lung damage. “When he arrived at the hospital, there was evidence of acute pneumonia in the entire right lung.”

After his admission to the hospital, the boy was hospitalized in a pediatric ward, where he was treated by specialists in pulmonary medicine. He underwent a number of diagnostic tests prior to the decision on chest surgery. “Over the past two years, Suleiman had stopped moving his legs,” said Yizhar. “He had no feeling in his lower limbs and could not stand on them; his parents had to transport him in a wheelchair.”

After his respiratory condition improved, “we decided to operate it in order to perform an excision of the unusual and large tumor from the chest.” In the successful operation, the entire tumor was removed.

The child’s rapid recovery surprised even his doctors. “After the tumor was removed, Sliman was moved from pediatric intensive care to the pediatric surgery department, where his respiratory condition improved greatly,” recalled Yizhar. “The next stage was inevitable, so I said to him: ‘Come on, kid, we start walking,’”

The doctors believe that the removal of the tumor in his chest, ostensibly a location unrelated directly to walking, has reduced the pressure on the spinal cord, improved his breathing and nutritional status and helped him start walking.

“He took my request seriously and put his feet on the floor, making a great effort to move one leg and then another,” continued Yizhar. “He really wanted to go, and he had great determination. He himself pushed his wheelchair around the ward.”

He has been transferred to Alyn Hospital Pediatric and Adolescent Rehabilitation Center where he will continue his healing and undergo rehabilitation.