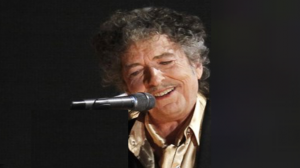 Here’s a look into a few great ‘Jewish moments’ of Bob Dylan, the 15th Jewish Laureate of the Nobel Prize in literature.

JTA – Maybe the times are a changin’? Bob Dylan became the first person considered primarily a musician to win the Nobel Prize in Literature when he was bestowed the prestigious honor on Thursday. The Bard — as he is known affectionately by fans, underscoring how he is often seen equally as a poet and musician — became the fifteenth Jew to win the literature prize, joining the ranks of Saul Bellow, Isaac Bashevis Singer and Patrick Modiano. He even beat out fellow Jew Philip Roth, who has for years been seen as a favorite to win the Nobel (and at age 83, may feel the opportunity is fast slipping away).

Dylan’s religious trajectory has been interesting, to say the least. Born Robert Zimmerman and raised in a tight Jewish community in Hibbing, Minnesota (he spent summers at Herzl Camp, a Zionist camp in Webster, Wisconsin), Dylan became a born again Christian in the 1970s. After releasing a couple of polarizing gospel music albums, he returned to his Jewish roots in the ’80s. In recent decades he has even participated in holiday services at Orthodox Chabad synagogues.

So in honor of Dylan’s historic achievement, we give you his five most Jewish moments:

1. Holding his son’s bar mitzvah at the Western Wall

Bob Dylan, (3rd from left) with his son Jesse, in the white tallis on right, at the Western Wall in September 1983. – Photo: Facebook

Not too long after releasing the last of his Christian music albums in the early ’80s, Dylan made an extremely Jewish statement: he held his eldest son Jesse’s bar mitzvah at the Western Wall. Jesse, born to Dylan’s first wife Sara (née Shirley Marlin Noznisky), went on to become a music video director and founded the media production company Wondros.

After his mysterious “return” to Judaism, Dylan studied with Chabad rabbis in the 1980s. His appearance on the Chabad telethon fundraiser in 1989 wasn’t his first endorsement of the movement (or his first telethon cameo) — but it might have been his Jewiest. A yarmulke-clad Dylan accompanied songwriter Peter Himmelman (his Jewish son-in-law) and Harry Dean Stanton on harmonica as the group played “Hava Nagila.”

3. Holding a seder with Marlon Brando

By 1975, Dylan had released many of his seminal albums, such as “The Times They Are A’Changin’,” “Highway 61 Revisited” and “Blood on the Tracks.” Marlon Brando had already starred in most of his iconic films, from “On the Waterfront” to “The Godfather.” So the 1975 congregational seder at Hollywood’s Temple Israel — which Brando crashed, and where Dylan played his anti-war anthem “Blowin’ in the Wind” — was not your grandmother’s festive meal. According to the JTA story on the event, Rabbi Haskell Bernat, the senior rabbi of the congregation, said that Brando, Dylan and a third guest — Dennis Banks, a leader of the American Indian Movement (misidentified in the story as “Kenneth” Banks) — “had contributed to the sense of justice and social awareness of the American people.”

Just after his son’s bar mitzvah at the Kotel — and a year after Israel’s controversial first Lebanon War — Dylan released the song “Neighborhood Bully” on his 1983 album “Infidels.” In what is arguably one of the most pro-Jewish rock songs ever recorded, Dylan describes Israel as an “exiled man” who is unfairly labeled a bully for fending off constant attacks from his neighbors. One verse goes: “Well the neighborhood bully, he’s just one man/His enemies say he’s on their land/They got him outnumbered a million to one/He got no place to escape to, no place to run/He’s the neighborhood bully.”

5. Endorsing “Like a Rolling Stone” music video by an Israeli director

“Like a Rolling Stone,” one of Dylan’s most popular songs, was released in July 1965. Nearly 50 years later, in 2013, Israeli director Vania Heymann — a graduate of the Bezalel Academy of Art and Design — created an interactive music video for the song. The video allowed viewers to change “channels” and choose from an array of celebrities singing the song’s lyrics. Dylan unexpectedly endorsed the project and promoted it on his official website. Heymann, born to an Orthodox family in Jerusalem, has since directed the acclaimed music video for Coldplay’s song “Up & Up.”

Well, he knocked out a lynch mob, he was criticized
Old women condemned him, said he should apologize.
Then he destroyed a bomb factory, nobody was glad
The bombs were meant for him. He was supposed to feel bad
He’s the neighborhood bully

Well, the chances are against it and the odds are slim
That he’ll live by the rules that the world makes for him
’Cause there’s a noose at his neck and a gun at his back
And a license to kill him is given out to every maniac
He’s the neighborhood bully

He got no allies to really speak of
What he gets he must pay for, he don’t get it out of love
He buys obsolete weapons and he won’t be denied
But no one sends flesh and blood to fight by his side
He’s the neighborhood bully

Well, he’s surrounded by pacifists who all want peace
They pray for it nightly that the bloodshed must cease
Now, they wouldn’t hurt a fly. To hurt one they would weep
They lay and they wait for this bully to fall asleep
He’s the neighborhood bully

Every empire that’s enslaved him is gone
Egypt and Rome, even the great Babylon
He’s made a garden of paradise in the desert sand
In bed with nobody, under no one’s command
He’s the neighborhood bully

What’s anybody indebted to him for?
Nothin’, they say. He just likes to cause war
Pride and prejudice and superstition indeed
They wait for this bully like a dog waits to feed
He’s the neighborhood bully