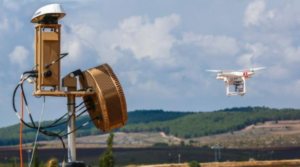 The airport has been in an ongoing dispute with its neighbors and environmental groups about expansion.

Planes were suspended on Wednesday night after a member of staff spotted an unmanned aerial vehicle (UAV) above the runway.

More than 110,000 had been affected by the closure, in one of the busiest weeks of the year.

Gatwick was only able to re-open after military reinforcements were brought in on Thursday.

They came with technology that was used to defeat ISIS in Syria, which the Daily Mail identified as the Israeli-made Drone Dome.

It uses radar technology to spot a drone, and a frequency jammer in order to cut the vehicle from its pilot, and bring it down to the ground softly.

The UK purchased six of the system, unveiled in 2016, in August for Middle-East operations, at a cost of close to US$ 3.3 million each.

Drone Dome is manufactured by government-owned Rafael Systems, which has specialized in cutting-edge weapon interception systems.

Aviation chiefs are going to be on a steep learning curve to counter the security threat posed by drones after the costly and humiliating shutdown of Gatwick.

The fear is that if a drone smashed into a passenger plane or was sucked up into one of its engines, its highly flammable lithium battery could cause a catastrophe.

Deputies in the European Parliament approved EU-wide regulations on the use of drones, but still need formal approval from European ministers before taking effect.

But finding high-tech solutions to the drone threat in airport presents particular challenges, says Lucas Le Bell, founder of the start-up Cerbair that specialises in tackling the drone problem.

The noise levels at airports, the security requirements and the saturated level of communications make the task much harder.

His team is working on isolating the frequencies used to control drones, so they can not only detect and locate the devices but take control of them.

Elsewhere in France meanwhile, Mont-de Marsan airbase in the southwest has been working on a more low-tech solution.

The airforce, inspired by a similar experiment in the Netherlands, has been training golden eagles to search and destroy the intruders.

But that system still needs work: earlier this year, one of the eagles attacked a girl after mistaking her vest for the enemy.