The demonstration was not backed by Shteinman and the mainstream Haredi leadership, although they are vigorously opposed to the enlistment of yeshiva students.

A demonstration staged by the radical Eda Haredit organization turned violent Thursday night, with haredi protestors throwing rocks, glass bottles and other objects at police, injuring at least eight officers, two of whom were taken to hospital in moderate condition. 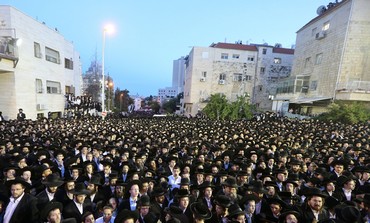 The police made at least ten arrests and fired a water cannon to disperse violent protesters.

The protest in front of Jerusalem’s IDF recruiting office in Romema was supported by leading haredi Rabbi Shmuel Auerbach, who is the head of what is known as the Jerusalem Faction, a grouping of non-hassidic haredim who do not accept the leadership of Rabbi Aharon Leib Shteinman, the otherwise acknowledged leader of the non-hassidic haredi community.

Speaking at the protest, Auerbach implored the haredi community not to back down on the issue of enlistment. 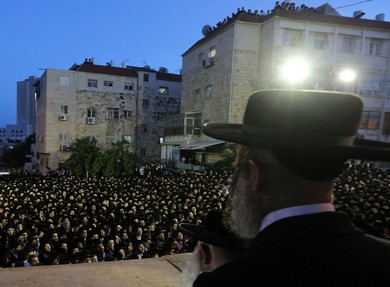 “There can be no compromise here. We will stand as a wall against these decrees, so nothing can penetrate them,” the rabbi said.

“If we create even the smallest gap in this wall, then it will open the way for them to enter,” he continued.

“Yeshiva students should not listen to these blandishments that if they go to the army, they’ll be able to earn a better income. It’s like [the biblical figure] Esau who sold his birthright for a pot of lentils,” said Auerbach.

“There are people who want to uproot Torah from the Jewish people, and our task is not to leave the study hall.” 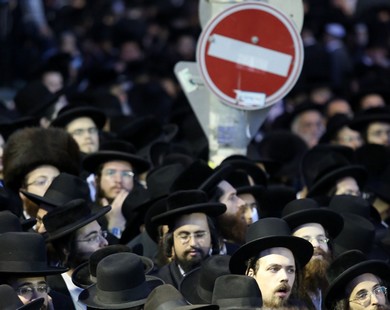 Rabbi Moshe Shternboch, the second-most senior figure in the Eda Haredit, said that the community would continue as it has done despite any laws passed by the government.

The Eda Haredit is a particularly radical segment in the haredi community but represents only a few thousand families, predominantly in Jerusalem.

The demonstration was not backed by Shteinman and the mainstream haredi leadership, although they are vigorously opposed to the enlistment of yeshiva students.

Last week, political sources said that the committee was deliberating on whether to leave in place existing provisions of the Law of Military Service of 1986, through which refusal to serve is punishable by imprisonment. 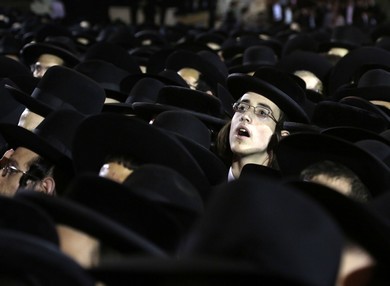 Criminal sanctions for those refusing to serve were opposed in discussions on the issue last summer by the haredi political parties, as well as Likud, and were not mentioned in the outline for haredi recruitment legislation that formed a critical part of the coalition agreement between Likud Beytenu and Yesh Atid.

Well-placed sources reported last week that the notion of criminal sanctions had arisen again in the committee because of potential problems with the efficacy of economic sanctions that have been suggested to spur haredi enlistment.

The coalition agreement called for full implementation of the new law by 2017, with significant recruitment targets for the interim years. According to that outline, 1,800 haredi men will receive full exemptions from national service every year in order to continue with full-time yeshiva study, with the remainder of the annual intake serving in either the military or in the civilian service program.

Back in October, Auerbach and his followers established a new political party called Netzah to compete with the established non-hassidic haredi party Degel HaTorah (part of United Torah Judaism) for the vote of that constituency in the January general election.

The move came as a result of Auerbach’s failure to capture the haredi leadership, as well as perceived political slights by Rabbi Shteinman and the mainstream haredi rabbis toward Auerbach’s faction.

Ultimately, Netzah did not run in the elections but withdrew at the last moment, on condition that the mainstream haredi leadership consult with Auerbach before making any agreements regarding the issue of haredi enlistment.

Last week’s reports about the possibility that haredi yeshiva students would be willing to serve was widely reported in the haredi press.

Neither Yated Ne’eman, the newspaper and mouthpiece of Degel HaTorah, nor Hamodia, a newspaper of the mainstream hassidic Agudat Yisrael party, mentioned the call for Thursday’s demonstration in its Thursday edition.

Alongside the haredi demonstrators was a small counter-demonstration led by enlisted haredi soldiers protesting in favor of sharing the burden of service.