A Palestinian State Benefits No One… Except the Kleptocrats 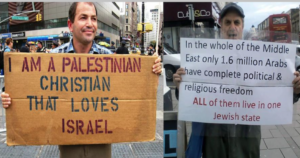 As soon as one stops listening to the Palestinian leaders and the instigators paid & indoctrinated by Abbas or Hamas to maintain the confrontation, you will hear more and more Palestinians say they simply can’t, prefer not to, live without Israel.

It is widely assumed that a Palestinian state will not only benefit the Palestinian Arabs, but is crucial to their future as a “people.”

But, as legendary Hollywood producer Jerry Belson wrote for an episode of Odd Couple back in the 1970s, “Never ASSUME, because when you ASSUME, you make an ASS of U and ME.”

The entire land-for-peace process has been based on this assumption. The thing is, it isn’t shared by a great many Palestinian Arabs, the people who the scheme is ostensibly designed to benefit.

“Everyone wants to work [in Israel], everyone wants quiet, and a good life,” a man from Gaza told Ynet news last week after Israel issued a record number of work permits in response to relative calm in the region.

That many Palestinians now realize this “quiet, good life” cannot be had under either the Palestinian Authority (PA) or Hamas is a recurring theme in recent years.

Who wants to live in Palestine?

Last year, the Israeli army expressed concern over the growing number of Palestinians requesting permits to bring their children into Israel for medical treatment, only to abandon those children at the Gaza border and sneak into the Jewish state. Life on the run in Israel was preferable to life under Hamas.

Others have told Israel Today that they’d rather have the IDF return and reimpose Israeli sovereignty over the Gaza Strip. “There was once hope we could remove Hamas through elections. But now we realize that [PA] President Mahmoud Abbas is not much better. He hasn’t done anything for the Palestinian people. Many now believe that Israeli occupation is preferable,” Muhanad, a 35-year-old Gaza resident, told us back in 2018.

Two years prior, even the Palestinian Authority’s official media mouthpieces had to admit that Palestinian Arabs were better off working for Israelis. “The lack of monitoring of [Palestinian] owners of companies and factories and their exploitation of workers is what has forced people to Israel, to work and build in Israel. Workers have to go to Israel, because no one [in the PA] gives them what they deserve for their work,” said Qassem Abu Hadwan, a laborer from Hebron, in a 2016 interview with PA TV.

At a recent Likud campaign rally ahead of the upcoming Israeli election, MK Gideon Sa’ar insisted that “there is nothing to be gained from a non-functional, non-viable [Palestinian] state…” And that is true for both Israel and the Palestinians themselves.

The Palestinians are merely pawns

The reality is that the land-for-peace process is more about putting Israel in its place – for both the Arabs and the international community – than it is about truly helping the Palestinians.

BDS victory against SodaStream: Factory closed, hired employees (Palestinians) fired, as company relocates to the Negev…..at the expense of the Palestinian ‘family providers’.

Israel itself is concerned that by not facilitating the creation of a Palestinian state, or at least an autonomous Palestinian entity, it will face an insurmountable demographic threat that will soon result in the Jews being outnumbered in the Jewish state.

Perhaps they’re right, and a one-state solution is detrimental to Israel’s future. Still, one must remember that David Ben Gurion and his generation declared Israel’s independence when Jews were still a minority west of the Jordan River. It is unwise to dismiss faith when making political decisions in this land.

What is certain is that a Palestinian state born under the present circumstances will be unable to stand on its own two feet, let alone provide a better future for its people, who will continue to seek their livelihood in Israel. How does that solve anything?