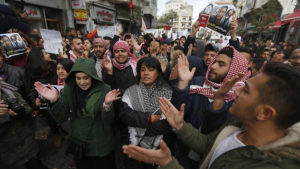 The PA, which has been imposing its own financial sanctions on the Gaza Strip, also expressed fear that the easing of restrictions would embolden Hamas and tighten its grip over the coastal enclave.

Palestinian officials in Ramallah claimed that the US administration and the Israeli government were now talking about improving the living conditions of the Palestinians in the Gaza Strip as a way of “undermining the Palestinian national project, including the establishment of an independent and sovereign Palestinian state.”

The PA leadership has been facing growing pressure from Palestinians to lift the sanctions that President Mahmoud Abbas imposed on the Gaza Strip about one year ago. The sanctions include, among other things, cutting off salaries to thousands of PA employees, as well as financial assistance to hundreds of families in the Gaza Strip. The PA initially said it would stop paying for the electricity and fuel that Israel supplies to the Gaza Strip, but later partially backtracked.

The PA’s sanctions on the Gaza Strip have triggered an unprecedented wave of protests in some parts of the West Bank, with Palestinian protesters demanding an end to the punitive measures.

Some PA representatives said they were hoping that the sanctions would aggravate the humanitarian crisis to a point where Palestinians would revolt against Hamas, which violently seized the Gaza Strip in the summer of 2007.

PA officials have repeatedly emphasized in recent weeks that they will not lift the sanctions unless Hamas relinquishes control over the Gaza Strip and allows the government of Palestinian Prime Minister Rami Hamdallah to assume its civilian and security responsibilities there.

PA officials in Ramallah have been following with increased concern statements by Israeli and US administration officials about the need to prevent a humanitarian and economic crisis in the Gaza Strip.

On Tuesday, Nabil Abu Rudeineh, spokesman for the PA presidency, described the ideas that are being floated around concerning the Gaza Strip as “illusions.”

These ideas, he said, were aimed at “abolishing the Palestinian national entity and killing the [Palestinian] national project of establishing our independent Palestinian state with east Jerusalem as its capital.”

Abu Rudaineh claimed that the US and Israel were seeking to exploit the crisis in the Gaza Strip for “political and humanitarian” purposes.

Referring to a report about an Israeli plan to build a sea port in Cyprus for cargo ships destined for the Gaza Strip, the PA spokesperson said that such “suspicious” ideas and proposals should only come in the context of a comprehensive political solution that is based on international resolutions.

“This is an attempt to create coexistence with the occupation and evade the explosive reality,” Abu Rudeineh said.

Channel 2 reported on Monday that Defense Minister Avigdor Liberman had advanced the port plan during his recent visit to Cyprus.

According to the report, the plan would include construction of a special pier for cargo ships carrying goods destined for the Gaza Strip. They would be checked with the help of an Israeli monitoring mechanism to ensure that no weapons were being smuggled into the Hamas-controlled coastal enclave.

However, a government spokesman in Cyprus was quoted on Tuesday as saying, “There is no agreement over the construction of a port in Cyprus to send, under Israeli control, goods to the Gaza Strip, but there is a request which is being considered.”

Asked to comment on the Cyprus port idea, a top Abbas aide said, “We don’t understand what’s going on; has Cyprus become an Israeli province? Who gave Israel the authority to involve Cyprus in matters related to a sea port or a prisoner exchange agreement [between Hamas and Israel]?”

Some officials and political analysts in Ramallah said they were convinced that the increased talk about solving the crisis in the Gaza Strip was part of the US administration’s yet-to-be-announced peace plan. They believe that the plan, which US President Donald Trump has called the “deal of the century,” is aimed at “solidifying” the split between the West Bank and Gaza Strip.

“Israel and this US administration don’t want to see the West Bank and Gaza Strip united,” said a veteran Fatah official. “But what they need to understand is that any gestures to the Gaza Strip will play into the hands of Hamas, prolong its rule and absolve of its responsibilities towards the residents living there. This would be a severe blow to President Abbas’s efforts over the past few years to undermine Hamas.”

ABDEL NASSER Al-Najjar, a former chairman of the Fatah-affiliated Palestinian Journalists Syndicate, said he was worried about reports to the effect that Hamas was prepared to accept US and Israeli ideas to improve the living conditions of the Palestinians and ease restrictions on the Gaza Strip.

“It would be a disaster for the Palestinians if the new American peace initiative would be presented as a plan to lift sanctions and improve living conditions in the Gaza Strip,” Najjar wrote in an article published in the PA’s daily Al-Ayyam newspaper. “Obviously, the Palestinian cause is at a crossroads and the Palestinian leadership is facing immense pressure. But in the end, it is the Palestinians who decide. Even if the whole world accepts it, the [US] peace plan will not pass without the Palestinians’ consent.”

Najjar and other Palestinians, including several Abbas loyalists, urged the PA leadership to remove the sanctions against the Gaza Strip to avoid a situation where the Palestinians would have to permanently live with two separate entities.

“It would be better for us to share hunger than to destroy the Palestinian cause,” Najjar wrote, appealing to the PA leadership to lift the sanctions and reconsider its entire policy towards the Gaza Strip.

Abbas’s ruling Fatah faction, in a statement published in Ramallah, claimed that some Hamas leaders seemed to support Israeli and US proposals to focus on solving the humanitarian and economic crisis in the Gaza Strip.

Fatah also claimed that Hamas leaders, who it did not mention by name, have been sending “direct messages to the US and America” to discuss the proposals under the pretext of finding humanitarian solutions to the crisis in the Gaza Strip.

In its statement, Fatah warned Hamas that dealing with the Israeli and American proposals was tantamount to “betraying the cause, the land, Jerusalem and the al-Aqsa [Mosque].”

Palestinian political analyst Amjad Subhi said that the talk about solving the crisis in the Gaza Strip has worried Abbas and several senior officials in Ramallah. “The Palestinian Authority sees this as a gift to Hamas,” he said. “Abbas and his government believe that Israel and the US want to keep Hamas in power in the Gaza Strip so that the Palestinians would never be able to establish their own unified and independent state.”

Subhi and other sources in Ramallah said that the PA leaders were already concerned about Egypt’s recent decision to reopen the Rafah border crossing along its shared border with the Gaza Strip. Abbas is even reported to have sent messages to President Abdel Fattah al-Sisi protesting against the reopening of the Rafah terminal.

Abbas, according to an informed source in Ramallah, is particularly worried that his political arch-rival, Mohammed Dahlan, would benefit from the Egyptian gesture. Dahlan, who is based in the United Arab Emirates and has close ties with Sisi, is said to have played a vital role in convincing the Egyptian authorities to ease travel restrictions on the Palestinians in the Gaza Strip.

Sisi dismissed Abbas’s messages and said Egypt was acting on the basis of what’s good for its national security and interests, the source said.

“We have reached an absurd situation where Israel, the US, and many international parties are doing their utmost to find a solution to the problems in the Gaza Strip and alleviate the suffering of the people, while the Palestinian president and his government are working hard to keep the sanctions and intensify the crisis,” the source added.