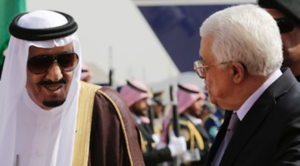 In Riyadh, PA despot Abbas was urged by Saudi Royals to distance the new Palestinian unified gov’t from Iran and not allow Hamas to stockpile weapons.

They stressed that he should stick to his stance that the Islamist group not be allowed to maintain its weapons stockpiles under the fledgling unity government pact.

Under the Egyptian-brokered deal signed between Abbas’s Fatah and Hamas movement on October 12, the Palestinian Authority is due to resume full control of the Gaza Strip by December 1.

However in recent months Hamas has demonstrated its ongoing ties with Iran by sending several high-level delegations heading to Tehran, underlining their friendship with the Middle East’s preeminent Shiite power.

The public show of friendship has irked Riyadh. Over the weekend Crown Prince Mohammed bin Salman accused Iran of and its proxies of “direct military aggression” after Saudi forces intercepted a missile fired at the country’s capital by Huthi rebels in Yemen, who they say are an Iranian proxy force.

A report in the Saudi Press Agency noted only that Abbas and the King “reviewed the latest developments in the Palestinian arena.”

It came as Israeli prime minister Benjamin Netanyahu told parliament that Israel is “acting to achieve peace” with some Arab states.

“We are improving our relations with the moderate elements in the region and establishing peace with Egypt and Jordan,” the premier said during a session marking the Balfour Declaration centennial.

“We are acting to achieve peace with other Arab countries who stand with us in the face of radical Islam, and I can only hope that the Palestinians finally take this approach and turn to peace. ”

Israeli officials have hinted for several years that Sunni Arab states have warmed up to Israel in the fact of mutual hostility against Iran, which is closely aligned with Syrian President Bashar Al Assad and Lebanese militia Hezbollah.