After hundreds of years, Jesus’ final burial place was revealed, by National Geographic 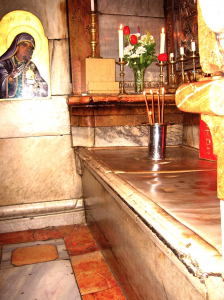 REPORT: Hidden beneath marble for centuries with an alternative narrative, the stone slab, believed to have held Jesus’s remains before burial, has finally been exposed.

The assumed final resting place of Jesus Christ was exposed for the first time in centuries, National Geographic reported on Wednesday.

The Stone of Anointing, where Jesus’ body is said to have been anointed before burial. – Photo: Wikipedia Commons

The stone slab which has traditionally been recognized as that on which Jesus’s body was lain after his crucifixion has been concealed by marble casing since 1555 CE or earlier in the Church of the Holy Sepulchre in Jerusalem’s Old City.

According to National Geographic, archaeologists found a large amount of fill material beneath the marble, which will take significant time to analyze. Underneath it, NatGeo Society archaeologist-in-residence Fredrik Hiebert says, “we will finally be able to see the original rock surface on which, according to tradition, the body of Christ was laid.”

The report suggests that analyzing the rock could give scholars a better understanding of the original tomb’s form and how it came to be a center of worship since it was first recognized.

Little remains of the Church of the Holy Sepulchre that Constantine consecrated on September 13, 335. The Persian invasion of Jerusalem destroyed the Constantinian complex of the church. The tomb of Jesus, church historians say, was destroyed in 1009 after Caliph Hakim gave an order to destroy all churches in the Middle East. His soldiers took sledges to the rock, and the remains are covered up by the marble edicule.

The church went through a renaissance in the age of Crusaders, with the pope’s soldiers rebuilding the ruined church and unifying the adjacent chapels. It was later closed after Saladin’s conquest of the Holy Land, and eventually decayed as worshipers had limited access to the holy site.

In the 14th century, by means of a papal bull, the Franciscans took over the church. Over the next few centuries, the church survived fires and earthquakes, and was renovated and repaired several times.

During the 1967 war, then defense minister Gen. Moshe Dayan approved the use of tanks and planes in the fight for the Old City of Jerusalem, however he gave a strict order not to hit the Dome of the Rock, al-Aksa Mosque or the Church of the Holy Sepulchre.

Immediately following the war, Dayan declared: “We have returned to the most sacred of our holy places, never to part it from again… And to our Christian and Muslim fellow citizens we solemnly promise religious freedoms and rights. We came to Jerusalem not to possess ourselves of the holy places of others, or to interfere with the members of other faiths, but to safeguard the city’s integrity and to live in it with others in unity.”

Today, six denominations – Greek Orthodox, Armenian Orthodox, Roman Catholic, Egyptian Copts, Syriacs and Ethiopians – celebrate their rites in the church and have a share in the building. It is currently undergoing another major restoration, with the funds coming from Jordan’s King Abdullah.