Salafist leader threatens that once his rebels topple Assad’s regime they’ll set their sights on Jerusalem; says ‘We won’t rest until Palestine is liberated’

The leader of the radical Salafist movement in Jordan, whose organization actively supports the Syrian rebels’ efforts to topple President Bashar Assad’s regime warned Sunday that once the Damascus opposition achieves its primary goal, it will set its sights on Israel. 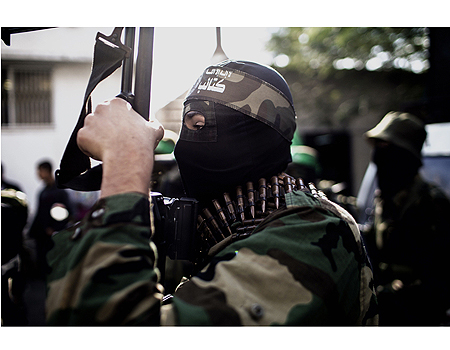 The group’s leader, Abed Shihadeh, who is also known as Abu Muhammad al-Tahawi, spoke at the funeral of a Jihadist who committed a suicide attack in Amman last week.

“We tell Benjamin Netanyahu, the (Israeli) prime minister, get ready. The army of the Prophet Mohammad is coming your way.”

Shihadeh added: “Those carrying explosives in Syria, Iraq, Afghanistan and Pakistan will find you, Allah willing,” he added. “The next fight is between us and you.”

The jihadist leader further pledged to “Take over Damascus and then head to Tel Aviv… As far as we are concerned, Palestine stretches from river to sea, from Rafah to a-Nakura. We will not rest until Palestine is liberated.”

“America is the mother of all terror in the world,” he added, further blaming the US for “standing by Assad and the Jews.”