Eight protesters who were arrested Thursday at a haredi anti-draft demonstration in Jerusalem were released Friday, seven under restrictions. 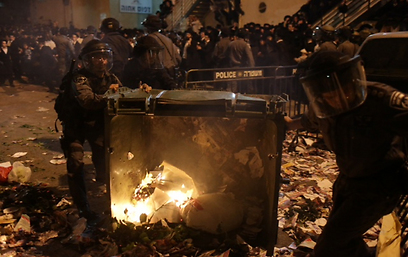 Internal Security Minister Yitzhak Aharonovich said he was appalled by the protesters’ violence which was also directed at police officers and promised that the rioters would be punished.

One of the detainees, aged 17, was released under restrictions by a police officer while the others were brought before a court where it was decided to release them on the condition they avoid demonstrations for 90 days. Police said all eight would be prosecuted. 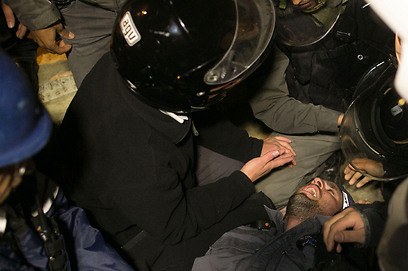 “The value of Torah education is important to us all, but so are the other duties and privileges in the country,” Minister Aharonovich said. “Criminal behavior, illegal protests and assault of officers will not change the equal share of the burden law and the government’s firm stand on the issue.”

Some 30,000 haredim held a protest vigil in Jerusalem Thursday. The rally, held in protest of haredi enlistment to the IDF and civil service, quickly turned violent, resulting in the injuries of six officers and five protesters. Eight protesters were arrested.

The protest was held at the initiative of the most radical of haredi factions – the Eda Hahredit – against what they dub the “enlistment edicts,” currently threatening yeshiva students.

They were joined by a number of more mainstream haredi rabbis. On the other side of the street a small number of haredi soldiers were holding a counter protest against draft dodging.

Omri Efraim contributed to this report