During the last Jewish year of 5774, aliya from around the world increased by more than 30%, reaching around 25,000 immigrants.

The Zionist project of ingathering the exiles is undergoing a historic shift: We are moving from an aliya of rescue to an aliya of free choice. 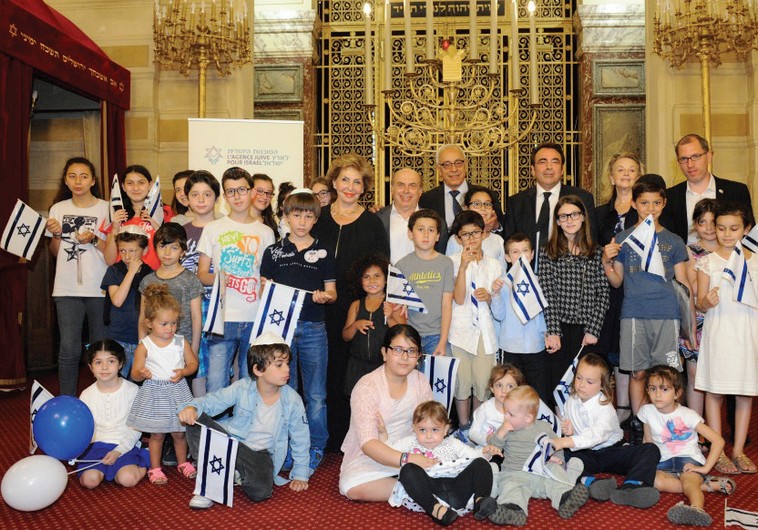 FRENCH JEWISH children at the historic Synagogue des Tournelles in Parisin July ahead of their aliya with their families. – Photo:EREZ LICHTFELD

During the most recent Jewish year, 5774, aliya from around the world increased by more than 30 percent, reaching some 25,000 immigrants.

Behind this huge increase are two highly symbolic developments.

First, the number of olim (immigrants) from the United States, Canada, Western Europe and Australia – traditionally considered the core countries of the free world – reached a 40-year high, surpassing the number of olim from the rest of the world for the first time in Israel’s history.

Second, the rate of aliya from France, the point of origin for the greatest number of olim over the past year, is so high that moving to Israel is no longer an unusual or unexpected choice there. As a result, for the first time, there is now a large Jewish community in the free world – the second-largest, in fact, after the United States – for which aliya is a normal part of life.

The fact that a majority of Israel’s many immigrants are coming from free and prosperous countries, with democratically elected governments and developed economies, is among the most noteworthy changes in immigration patterns in the history of our state. Until now, every massive wave of immigration has been primarily the product of violence and hardship, as Jews fled intolerable circumstances in the hope of finding better ones in Israel.

The aliyot of the end of the 19th and the beginning of the 20th centuries were sparked by pogroms in Russia. The immigrants who came before and after the Second World War were prompted by the rise of the Nazis and then the Holocaust. Those who came from the Arab world in the state’s early years fled persecution and violence in their host countries. And immigrants from the Soviet Union were driven by political oppression and economic deprivation. Of course, there have always been exceptions – Jews from the non-free world who chose to make aliya out of strong Zionist sentiment, and Jews from free countries motivated by economic and other existential concerns.

But, on the whole, mass aliya has until now been a phenomenon of necessity.

In contrast, today’s Western aliya is mainly the choice of people who want not merely to live comfortably, but also to lead rich, full and meaningful Jewish lives, and who regard Israel as the ideal place to do so. They are not being forced to leave their home countries to save themselves or their livelihoods. Instead, they are choosing to remain Jewish and, as a consequence of that choice, to live in Israel.

For them, making aliya is a way to strengthen their connection to the Jewish people and participate fully in the shared enterprise of the Jewish state.

But wait, one might say, we know that the largest proportion of such olim is coming from France, where anti-Semitic acts have been on the rise for several years and economic difficulties are causing scores of young people, not only Jews, to leave. Could I be overstating the enthusiasm of this aliya and downplaying the sober realities prompting so many Jews to move here? To this I would say, first, that historically Jews have tended to flee anti-Semitism only when it is also encouraged, directly or indirectly, by their governments. Yet in France today, while anti-Semitism is clearly on the rise, the government is combating it relentlessly and has been cooperating closely with the Jewish community to guarantee its safety. Second, French Jews, who enjoy their country’s robust social welfare system, are hardly without economic incentives to remain in France. Yet even if financial considerations truly were their main concern, they could easily make homes for themselves elsewhere in the European Union, where opportunities and social services await. That so many are opting instead to come to Israel, and in far greater numbers than to any other destination, shows that Israel is exerting a strong pull on them.

Indeed, French Jews have a number of options: They can assimilate into French society and live quiet, comfortable lives where they are; they can continue to live uncomfortably as proud Jews, connected to Israel, in France or a similar Western country; or they can live freely as Jews in Israel. Far from being a last resort, then, aliya has clearly emerged as a desirable choice.

What makes French aliya so striking is the popularity of this choice. Throughout history, the level of aliya from free countries has typically hovered around one-10th of a percent of the local Jewish community per year, almost never reaching half a percent.

Last year, aliya from France amounted to over 1% of all self-identified Jews, and the percentage among those who are active in their communities is even higher, around 4%. If we think about what this number means on the ground, we can imagine that when school started last month after the summer vacation, students in nearly every class found that one or more of their classmates had moved to Israel. In nearly every synagogue and neighborhood, dozens of congregants or families have emigrated. The number of people in metropolitan Paris alone who have sought out information about aliya from the Jewish Agency in recent months is in the tens of thousands.

For the first time in a Western country with a big Jewish community, aliya has become a mainstream phenomenon.

What does all this mean? For the Jewish Agency, it validates the conclusion we reached several years ago – that strengthening Jewish identity is the best way to encourage aliya from the free world. The majority of new olim from France and similar countries have participated in our Israel experience programs and other initiatives designed to cultivate their Jewish ties and their connections to the Jewish state.

More important, however, is what this means for the Jewish people: that we are at last realizing Theodor Herzl’s dream of normalizing Zionism.

Herzl envisioned the Jewish state as a magnet drawing every Jew who wished to maintain a robust Jewish life.

Today’s olim, whose decision to live here is a direct and affirmative consequence of their choice to remain proudly Jewish, are at last starting to make that vision a reality.

The writer is chairman of the executive of the Jewish Agency for Israel.