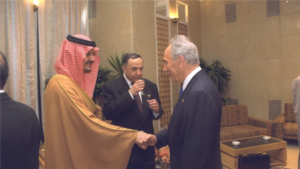 Saudi Crown Prince Mohammed Bin Salman is known for his out of the box thinking and his ambitious sweeping reforms in Saudi Arabia where he has made many enemies during a purge which robbed elites, including members of the royal family, of their illegally obtained wealth last year.

The Saudi leader – he’s expected to become king soon because his ailing father Salman is suffering from Alzheimer decease- has also radically changed his country’s attitude toward Israel which is no longer considered an outcast or illegal implant in the Middle East by the Saudis.

According to the Emirati newspaper Khaleej Times MBS, as he’s called by much of the media, recently arranged for a series of meetings between top Saudi officials and their Israeli counterparts during his visit to Cairo, Egypt in March.

Officially the meetings officially dealt with MBS’ ambitious plan to build a megacity called Neom which will partly build in Jordan and Egypt as well, but also addressed the upcoming American plan to solve the Palestinian Israeli conflict.

The $500 billion plan for the construction of Neom, a city of 26,500 square kilometers (the size of Belgium), includes hydro-agriculture projects which will be reportedly realized with Israeli help.

MBS has also called for religious freedom in Saudi Arabia, recently visited the heads of the Coptic Church in Egypt and the Anglo-Catholic Church in the United Kingdom and signed a deal with the Vatican to build churches in the ultra-conservative Muslim country.

Bin Salman, furthermore, works with Jason Greenblatt and Jared Kushner, Trump’s Jewish point men for the Middle East and Israel, on an out-of-the-box solution for the Palestinian Israeli conflict which reportedly includes the establishment of a Palestinian state ‘minus’.

The Palestinian mini-state would not have east-Jerusalem as its capital but Abu Dis according to media reports while Israel would retain security control over the Jordan Valley and large areas in Judea and Samaria.

The plan drew the ire of Palestinian leader Mahmoud Abbas who was summoned to Saudi Arabia in January where was updated about Trump’s ‘deal of the century’ by MBS according to the Israeli TV Channel Kan.

Abbas returned to Ramallah in total shock and later declared the plan “the slap of the century”.

MBS later met with a delegation of Jewish American leaders while being on a long trip in the United States where he again held talks with Kushner and Greenblatt.

Details of the meeting with the Jewish delegation were later leaked to the media and suggested the Saudi Crown Prince had “castigated” Abbas and other Palestinian leaders for spurning every opportunity to reach a peace agreement with Israel.

The Palestinian Arabs should accept the Trump peace plan or “simply shut up” MBS reportedly told the Jewish leaders.

The changing Saudi attitude toward Israel inspired by Crown Prince has also been reflected in recent publications by intellectuals, commentators, and journalists in the oil-rich Kingdom.

Saudi writers “have been increasingly expressing open support for Israel, approving of its policy towards Iran and even calling to normalize relations and make peace with it,” the Middle East Media Research Institute reported last week.

For example, during the so-called “Great March of Return” the Hamas-organized violent weekly protests on the Gaza-Israeli border, some Saudi commentators blamed Hamas and Iran for the deadly turmoil and said, Hamas and Iran “were promoting their interests at the expense of the children of Gaza.”

Iran has clearly replaced Israel as Saudi-Arabia’s biggest foe a fact that is also prominently featuring in many articles and commentaries published in the country recently.

“Today, the Arabs have no choice but to reconcile with Israel, and to sign a comprehensive peace agreement (with it), in order to free themselves up for confronting the great Iranian plan in the region, and (Iran’s) nuclear program, and to end (Iran’s) intervention in Arab affairs,” Ahmad Al-Jumay’a, the former deputy editor of the Saudi daily Al-Riyadh wrote last month.

‘If war breaks out between Israel and Iran, aimed at eliminating the foreign militias Iran has brought into Syria, who will you support?!’… (My) answer, which does not take a lot of courage to utter openly in the paper, is that I will side with Israel,” Ali Sa’d Al-Moussa, a columnist for the government daily Al-Watan later exclaimed.

Al-Moussa got support from Muhammad Aal Al-Sheikh, a senior columnist for the Saudi Al-Jazirah daily who also wrote Israel has a right to defend itself, while other Saudi commentators wrote similar things.

Saudi intellectual ‘Abd Al-Hamid Al-Hakim, the former director of the Middle East Center for Strategic and Legal Studies in Jeddah, has been most outspoken in his support for the Jewish state.

Al-Hakim congratulated Israel on its 70th Independence Day and welcomed the relocation of the U.S. embassy to Jerusalem.

He also wrote Jews have a historical right to the land of Israel, a right which is rooted in “monotheistic scriptures.”