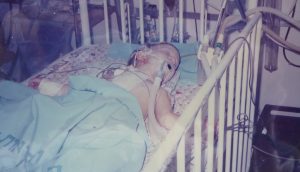 After crediting Haifa’s Rambam Hospital and staff for saving his life, and seeing Gaza, Syrian, and Palestinian children being lovingly cared for, a senior PA official donates “tens of thousands of shekels” to the Israeli institution anonymously, for obvious reasons.

A top official of the Palestinian Authority has donated an unspecified amount of money – described only as “tens of thousands of shekels” – to Rambam Hospital in Haifa. He was long treated there for cancer, saw the many children and adults from Gaza receiving similar treatment there, and decided that he wanted to share in the kindness.

“Medicine is a bridge between people,” said the man, who refused to have his photograph publicized and who is known only as M.

Some 1,200 residents of Hamas-run Gaza and of the Fatah-run Palestinian Authority receive medical treatment in Rambam Hospital each year. Among them this year was M., a man in his 40’s, who was diagnosed with a malignant growth in an unspecified area of his body. He received several rounds of treatment in Rambam, and credits the hospital staff with saving his life.

Upon the conclusion of his treatments, he made one last trip to the hospital, where, in a small ceremony with doctors and staff members, he bestowed his gift. The funds will be used to establish a recovery room for children cancer patients.

“When I arrived in Rambam,” said M., “I saw a medical staff giving devoted care to many patients – but I also saw the suffering of the children among the patients. I saw children who are Palestinian [Authority], Israeli, Syrian and from other countries being treated in Rambam, and who need all the help they can get. I decided to donate towards this end as an act of humanity and of solidarity.”

He said that both Israelis and Arabs “suffer from violence, and I am striving for a situation in which we can all contribute towards peace and health.”