The Aqsa Martyrs Brigade gunmen, who had been pardoned from Israeli prisons, say the NIS 1,500 that each receives from the PA is not enough & may hunger-strike until pensions are increased. 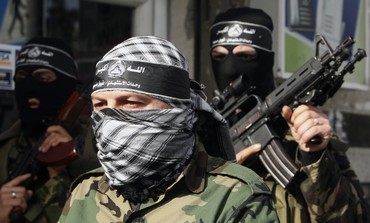 The gunmen, who had been pardoned by Israel, said that the NIS 1,500 that each one of them receives from the PA was not enough.

They threatened to launch protests in the West Bank if the PA government did not increase their salaries.

Muhammad al-Ashkar, a spokesman for the group in Tulkarem, said that he and his friends would stage demonstrations if the PA government did not comply.

He said that the Fatah members were also considering going on hunger-strike to demand an increase in their salaries.

Al-Ashkar pointed out that some 20 Fatah gunmen had four years ago to lay down their weapons in return for a pardon from Israel.

Since then, he added, each one of them has been receiving a monthly salary of NIS 1500 from the PA government.

Al-Ashkar told the Palestinian news agency Safa that repeated demands to increase their salaries have fallen on deaf ears.

Over the past few years, dozens of Fatah gunmen agreed to had their weapons over to the PA and stop their activities in return for an Israeli promise to stop pursuing them. In return, the PA government agreed to pay the former fugitives monthly salaries and recruit some of them to its security forces in the West Bank.