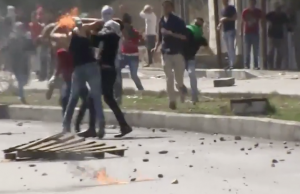 Walla! news identifies the dead terrorist as Ayman al-Abasi, a 17-year-old from Silwan. He previously spent a year and a half in an Israeli prison for his involvement in a 2012 stabbing in Ras al-Amud. Al-Abasi’s brother is currently serving a seven-year sentence, also for stabbing a Jewish man.

Arab media claims that the Al-Abasi was moderately to severely wounded, then died in a hospital.

Police released a statement that read: “About 10 petrol bombs were thrown at border police officers in Ras al-Amud. The force, whose lives were in immediate danger, fired at the lower body of a suspect who was seen with a petrol bomb in his hand. A hit
could not be definitely identified.”

A police spokesperson says that the dead rioter was holding a lit Molotov cocktail in his hand, which the security forces considered an immediate lethal threat. The statement added that police did not see any confirmed hit on the teen.

No Border Police were injured in the incident.