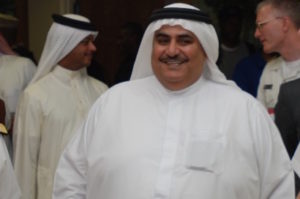 In another blow to Palestinian leadership’s narrative, Bahrain’s FM says Palestinians fight over Jerusalem is another of their ‘side issues’ that’s distracting real threats to the Arab world.

The Foreign Minister of Bahrain on Wednesday suggested that who controls Jerusalem is little more than a “side issue” that shouldn’t be derailing the international community, and especially the Arab world, from focusing on more pertinent issues.

If US President Donald Trump’s Jerusalem declaration was a major win for Israel, then getting the bulk of the international community to publicly oppose that move has been a comparable victory for the Palestinians.

The United Nations General Assembly on Thursday was set to vote on a resolution effectively condemning Trump’s recognition of Jerusalem as Israel’s capital.

But Bahrain Foreign Minister Sheikh Khalid Bin Ahmed Al-Khalifa wondered why everyone was going through such trouble over what a growing number of Arabs and Muslims are admitting isn’t really such an important topic for them.

Especially when doing so is only going to anger Trump and risk American commitment to combatting real threats in the Middle East.

“It’s not helpful to pick a fight with the USA over side issues while we together fight the clear and present danger of The Theo-Fascist Islamic republic,” tweeted Al-Khalifa.

Proponents of the Palestinian cause have long tried to inflate the position of Jerusalem and the Temple Mount in Islam, and thereby paint Israel’s sovereignty in this city as an affront to their religion.

Youssef Ziedan is an Egyptian scholar who specializes in Arabic and Islamic studies.

Today, it is common to hear that Jerusalem is Islam’s third holiest city, being the location of the “Al Aqsa Mosque” referred to the in the Koran.

“The Al-Aqsa Mosque [in Jerusalem] did not exist back then, and the city was not called Al-Quds. It was called Aelia, and it had no mosques.”

He is far from being alone in that position.