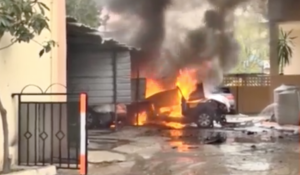 Mohamed Hamdan, a Palestinian Hamas member, survived an attempt on his life Sunday after a bomb planted in his car in southern Lebanon detonated, wounding him, the Lebanese military and the terror group said, with Hamas identifying Israel as the culprit without providing evidence. Hamdan’s leg reportedly had to be amputated.

Hamdan in the hospital – Arab media

Hamdan, also known as Abu Hamza, was “slightly wounded” in the attack, a Hamas official in Sidon, Ayman Shanaa, told a Palestinian television station, Paltoday.It was not immediately clear who carried out the bombing in the city of Sidon or why Hamdan, “one of the movement’s cadres” according to Shanaa, was targeted.

Hamas in a statement blamed Israel for the “criminal” act that wounded Hamdan in his leg. Sidon Mayor Mohammed Saudi said Hamdan was undergoing surgery in a local hospital.

The target, Mohamed Hamdan, was not a publicly known Hamas figure in Lebanon. A statement from Hamas, the Islamist group that controls Gaza, confirmed he was a member of the group, without detailing his role, and said “initial indications” suggested Israel was behind the bombing.

A Lebanese security official said the bomb, no bigger than 400 grams (14 ounces), was placed under the car seat. The official Lebanon News Agency said the bomb weighed 500 grams (18 ounces.) it was not immediately possible to reconcile the discrepancy. The agency said the explosion went off as Hamdan was getting into the car.

The explosion badly damaged the vehicle, causing a large fire and sending black smoke rising above the port city, about 27 miles south of the capital Beirut. The explosion caused some damage to nearby buildings and cars. Security forces cordoned off the area and firefighters put out the blaze.

A leader of the Palestinian Fatah movement in Lebanon said Hamdan was involved in operations in Israel. “The incident has Israeli fingerprints,” Mounir al-Maqdah, the Fatah official, told Reuters.

There are over 147,000 Palestinians living in Lebanon, most of them in the country’s 12 refugee camps, with two of these camps—including the largest one—located in Sidon.

Several armed factions are based in the camps where the state has no jurisdiction. Rivalry between them often leads to clashes.

In 2006, two members of the Palestinian Islamic Jihad were killed in the same neighborhood in Sidon when a bomb planted in a vehicle detonated as they passed near it. Israel was blamed for the attack.

Last year, another Palestinian official survived when he came under fire as he entered a residence in Sidon.

Political assassinations were common in Lebanon for years following the end of the country’s civil war in 1990. But they have subsided in recent years and the delicate sectarian-based political system has largely been stable.