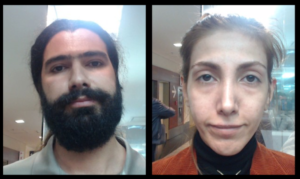 The two Iranians are suspected of involvement in terror activities having been arrested for illegally entering Argentina using doctored passports ‘with numerous spelling mistakes.’

An Iranian man and woman were arrested Saturday morning in Buenos Aires, Argentina, after they tried to enter the country with forged Israeli documents, Clarin reported.

The two are suspected of involvement in terror activities and were transferred for interrogation by local security forces.

The suspects, identified as Sajjad Samiel Naserani, 27, and Mashoreh Sabzali, 30, entered Argentina last week, claiming to be an Israeli couple named Netanel and Rivka Toledano. However, when they showed presented their passports, an immigration officer was alerted that the passports had been reported stolen.

Despite the warning, the pair were allowed entry.

After a few hours of investigations, Israel notified Argentina that the passports in question had in fact been stolen from a couple named David and Bridgette Assouline. Both of the Iranians were arrested in their hotel room and inspections confirmed that they were not the passports’ legal owners, and that the passports themselves had been doctored and presented numerous spelling mistakes.

The suspects are currently in custody and the incident is being treated as suspected terror activity.

The Authority for Combating Local Terror has been placed in charge of investigations.

Today marks 27 years since the terror attack against our Embassy in BuenosAires, perpetrated by Iran & Hezbollah. Iran’s history of global terrorism is decades long.

We shall ALWAYS remember the 29 victims.
May their memories be blessed, as we shall never forget them! 🇮🇱 🕯️ 🇦🇷

AND…
This is my third variation of this article because FACEBOOK continues to delete the story.