Arizona opens trade office in Israel after doubling trade since 2010 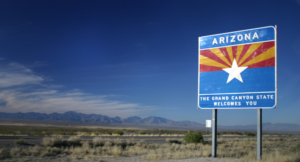 Arizona, the ‘Startup State’ signed a memorandum of understanding in 2018 to work closer with the Jewish ‘Startup Nation,’ planning to focus on startups, water-technologies, fintech, hi-tech and the defense & aerospace industries.

Arizona has approved the establishment of a new trade office in Israel, which is currently listed as the state’s ninth largest trading partner, totaling some $400 million in 2017.

Arizona Governor Doug Ducey approved a $275,000 budget for the new office, with $100,000 of it for initial setup funding, to be allocated in the fiscal year of 2019-2020, which begins in July 1, according to the Arizona Chamber of Commerce & Industry said in a statement.

The move comes after the Arizona Chamber of Commerce & Industry and the US-Israel Business Initiative signed a memorandum of understanding in 2018 to work together to strengthen economic and commercial ties between Arizona and Israel, focusing on water, fintech, technology and startups, and defense and aerospace.

Arizona’s trade with Israel more than doubled since 2010 and a number of Israeli companies have operations in the Grand Canyon state.

“This new trade office makes perfect sense,” Hamer said. “During Gov. Ducey’s first term in office, he has made clear Arizona’s support for a strong Arizona-Israeli relationship. From technological innovation, to water stewardship, to defense and aerospace, to GDP’s that are almost of equal size, we have so much in common. Israel is known worldwide as the Startup Nation. Arizona is the Startup State. Arizona and Israel are a great match.”