Another successful trial of the Arrow 3 interceptor was carried out at 8 am Friday morning. It was the interceptor’s second flight test and it was conducted within a trials field in the Palmachim Air Force base. 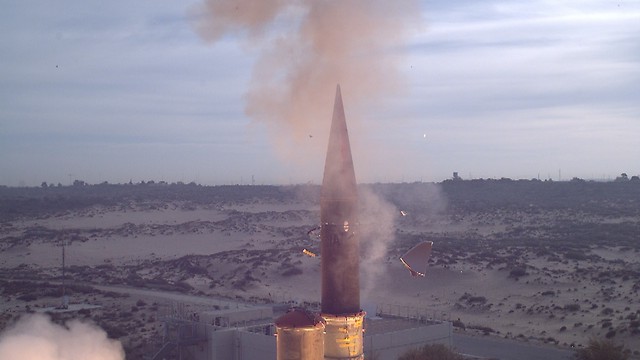 The main advantage of the Arrow 3 interceptor is in its ability to perform a change of flight direction while flying towards long-ranged target missiles.

The test was performed jointly by the Israeli Defense Ministry and the American Missile Defense Agency.

Last February, a first successful trial of the Arrow 3 system was carried out. Within the previous trial, the missile was launched from the Palmachin base towards the Mediterranean Sea, stayed in mid-air for six minutes and at its peak crossed the atmosphere and opened its second rocket engine.

Prime Minister Benjamin Netanyahu praised the security establishment for its successful trial of the Arrow 3 system, “a trial that results from American-Israeli cooperation.”

Netanyahu, who met with US Senators John McCain, Lindsey Graham and John Barrasso, added: “We will continue developing the means to protect the citizens of Israel and to secure the future of the state of Israel.”

The trial tested the capabilities and performance of the new Arrow 3 interceptor, which is considered innovative and evolutionary among worldwide interceptors. These capabilities will allow the existing operational Arrow system components to more effectively deal with future threats on the State of Israel

The interceptor was successfully launched and performed all flight phases in the atmosphere and space, according to plan and pre-defined trial objectives. The Arrow 3 system is a central part in the multi-layered defense system, which is designed and led by the Defense Ministry.

The Defense Ministry said: “The trial’s success is an important milestone in the operational capability of the State of Israel to protect itself against expected threats in the region. It is another trial in the development process, which will be continued in the next few years.” It was further added that in the future, additional trials will be conducted prior to the operation service of the system.

The main contractor for the development of the Arrow weapons and interception system is the IAI’s Malam, which work in cooperation with Beoing.

Arrow 3 is the Israeli solution to intercepting long-ranged missiles that exit the atmosphere. The improved missile will be able to stand a future scenario of Iranian launch of a ballistic missile with a nuclear warhead.

The Arrow 3 missile is not intended for intercepting Syrian Scud missiles. In order to deal with that threat, Arrow 2 batteries were deployed in central and northern Israel.