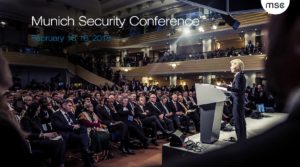 After a meeting with Israeli PM Netanyahu at the Munich Security Council Conference, that was requested by Austrian Chancellor Sebastian Kurz, he promised to support Israel should it seek a position at the UN Security Council in a tweet.

Austria has pledged to help Israel become a nonpermanent member of the U.N. Security Council, that country’s chancellor, Sebastian Kurz, announced on Twitter, Saturday. Kurz made the announcement following a meeting with Prime Minister Benjamin Netanyahu on the sidelines of the Munich Security Conference.

Excellent meeting with Prime Minister of #Israel, Benjamin @netanyahu during @MunSecConf. We want to continue to strengthen our bilateral relations and our multilateral cooperation. 1/2 pic.twitter.com/SFVwP43rA6

Kurz tweeted a picture in which he and Netanyahu are seen shaking hands at the conference and wrote, “Excellent meeting with Prime Minister of #Israel, Benjamin @netanyahu during @MunSecConf. We want to continue to strengthen our bilateral relations and our multilateral cooperation.

“We agreed to support #Israel if it should decide to be a candidate for the #UNSC. We will also continue our determined fight against #antisemitism!”

In a statement following their meeting, Netanyahu said, “Kurz promised me that Austria would change the voting pattern at the U.N. when it comes to Israel and would support the candidacy of Israel for nonpermanent membership in the U.N. Security Council.”

The meeting, which Netanyahu noted was held at Kurz’s request, was the first between the two leaders since Kurz’s conservative Austrian People’s Party formed a right-wing government with the far-right Freedom Party of Austria. Founded by former Nazis six decades ago, the Freedom Party long ago left the political fringes to establish itself as a mainstream party, gaining around a quarter of votes in the Oct. 15 parliamentary elections. In December, Netanyahu announced he would boycott Freedom Party ministers.