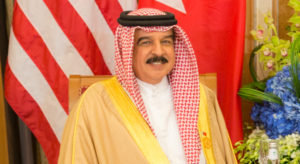 LOS ANGELES – Bahrain’s King Hamad bin Isa al Khalifa last week denounced the Arab boycott of Israel and said his subjects are free to visit the Jewish state. The head of the Persian Gulf country, which does not have diplomatic relations with Israel, made the statements to Rabbi Abraham Cooper, the head of the Simon Wiesenthal Center in Los Angeles, at a multi-denominational event at the center to sign and support a declaration denouncing religious hatred and violence.

Cooper and his partner at the Wiesenthal Center, Marvin Hier, visited Manama, Bahrain’s capital, by invitation, in early 2017.

A walk through the city, Cooper said, was an eye-opener. There was a church, with a huge cross, next to a Hindu temple, and 90 meters on an impressive mosque. Even a small synagogue, the only one in the Persian Gulf region, still stands in an older part of the city.

Hier and Cooper met with King Hamad and discussed the ruler’s plan to establish a Museum of Religious Tolerance in the capital city by the end of this year.

At the Los Angeles event last week, delegations of Buddhists in saffron robes, Sikhs in turbans, and Muslims with keffiyehs and hijabs [Muslim head-covers for men and veils for women], mingled with Jews with kippot [skullcaps] and Christians in business suits.

Some 400 members of these diverse groups signed the declaration to support full freedom of religious choice, government protection of minorities and to ensure that religious faith “serves as a blessing to all mankind and as the foundation of peace in the world.”

Like all others present, the Arab officials stood in respect as the colorful Bahrain National Orchestra, conducted by Field Marshal Mubarak Najem, played “Hatikva” preceded by the Bahraini and US national anthems, sung by Sumaya Meer and Cantor Arik Wolheim.

The key speaker was Shaikh Nasser bin Hamad al Khalifa, son of the king and a formidable endurance athlete, who led the Bahraini delegations, toured the Wiesenthal Center’s Museum of Tolerance and met with Jewish students.

A group of Habad Jews dance before lighting Chanukah Candles, for the first time in Bahrain. 25/Dec/2016 – Habad page:Facebook

As the evening’s climax, a group of distinguished “dais guests” formally signed the Bahrain Declaration. Among them were the speakers, visiting Arab officials, clergymen of various faiths,  television personality Mary Hart,  the evening’s master of ceremonies UCLA Prof. Judea Pearl and Betsy Bennett Mathieson, president of This Is Bahrain.

The latter government-supported booster organization presented each guest with a lapel pin featuring symbols of the country’s seven religions, with a Jewish menorah adjoining a Christian cross and a Muslim crescent.

Bahrain has some 1,423,000 inhabitants and a breakdown of their religious faiths indicate that 70% are Muslims; 14.5% are Christians; 10% Hindus and 2.5% Buddhists. The percentage of Jews is listed in different surveys as a fraction of 1%, but the actual number is even smaller, ranging between 36 to 40 actual residents.

In spite of the small numbers, Houda Ezra Ebrahim Nonoo, who is Jewish, served as the Bahraini diplomat in the US from 2008 to 2013, becoming the first Jewish woman to represent any Arab country on a diplomatic mission. The Nonoo family is of Iraqi-Jewish heritage and financed repair work for the only synagogue in Bahrain.

Large parts of the Jewish population left the country following riots in 1947 and 1967, but Jewish, Muslim and British sources agree that the riots were triggered by pro-Palestinian outsiders and that resident Arabs went out of their way to protect their Jewish neighbors.

But with the ascendancy of King Hamad bin Isa al Khalifa to the throne in 2002, domestic and foreign observers see an almost utopian state of relationships among Bahrain’s religious groups.

The monarch, who has an impressive collection of Frank Sinatra records, has enshrined religious tolerance both in the country’s law and by personal example. For instance, since 2015, he has celebrated Hanukka with both Jews and Muslims in attendance.

At the conclusion of the ceremony, a reporter asked Cooper whether the evening’s upbeat tone and hopeful notes were warranted in the light of the Middle East’s apparently endless conflicts.

Cooper responded that Bahrain, like Israel, “Lives in a tough neighborhood. But if there is to be any hope for the future, it will have to be realized by voices of religious moderation.”