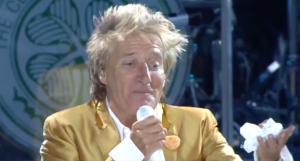 As part of his worldwide ‘HITS 2017’ tour, Stewart will naturally be performing all the massive hits from his incredible career, classic rockers like “Maggie May,” “Baby Jane”and “Da Ya Think I’m Sexy” through to big ballads such as “Sailing,” “You’re In My Heart,” and “Tonight’s The Night.”

“I’m looking forward to performing in Tel Aviv in June. I promise to deliver a fun, energetic show. I’ll be playing your favorite hits, with a few surprises too. I give you fair warning – fasten your seat belts. I’m pulling out all the stops,” Stewart said months ago in a recorded video statement.

Despite facing calls to cancel his performance in Israel, Stewart remained steadfast in his decision to take the stage in Tel Aviv.

David Brinn contributed to this report.