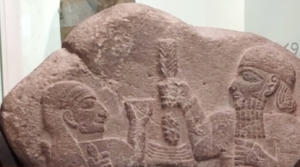 The Louvre is about to open a new exhibition in May, entitled: “Forgotten Kingdoms: From the Hittite Empire to the Arameans.” Among the artifacts on display will be four rare pieces from the Bible Lands Museum’s  permanent exhibition, which have been lent to the Louvre through a long and complex process of conservation and approval, which involved many staff people from both museums.

This is the first collaboration between an Israeli museum and one of the largest and most highly regarded museums in the world.

The four ancient artworks on loan to the Louvre are a rare 130 cm. basalt stele bearing an inscription of Hamiyatas, king of the Neo-Hittite kingdom of Masuwari; a stamp seal made of blue chalcedony depicting a winged lion and the head of a bearded man; a 10th-8th century BCE stele from the kingdom of Marash with an engraved relief of a couple feasting at a table filled with flat breads; and a stone libation vessel from the kingdom of Carchemish that was used to pour liquids dedicated to deities.

The new exhibition will focus on the Neo-Hittite and Aramean kingdoms that arose after the fall of the Hittite Empire – the great rival of ancient Egypt that stretched across Anatolia and ruled the lands of the eastern Mediterranean until around 1200 BCE. These successor kingdoms flourished in the 12th-8th centuries BCE, and perpetuated the political, cultural and religious traditions of the lost empire.

The exhibition will offer the general public a fresh look at the legendary sites of this forgotten civilization.

The artifacts on loan to the Louvre reveal different facets of Neo-Hittite culture, especially its religious dimensions and the responsibilities of state rulers to their gods.

The Bible Lands Museum permanent exhibition includes spectacular sculptures, rare jewelry, inscriptions, mosaics, and pottery that reveal the splendor and power of past cultures, and the world from which ancient Israel and the great monotheistic religions sprang.

Amanda Weiss, Director of the Bible Lands Museum: “This collaboration is the first of its kind between our museum and one of the largest and most influential museums in the world. It will enable millions of people from around the world to gain a glimpse into the fascinating history of our region.

“We welcome this collaboration and believe it will serve as the foundation for great cooperation and collaboration between the Bible Lands Museum Jerusalem and the Louvre in Paris.”