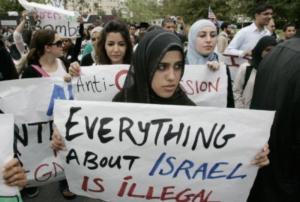 Students for Justice in Palestine received a formal written warning for disrupting a Jewish campus group event and intimidating the Jewish students with threatening chants.

The University of California, Irvine, has sanctioned an anti-Israel group for disrupting a program hosted by a Jewish campus group and intimidating Jewish students.

The UC Irvine Students for Justice in Palestine chapter will be issued a “written warning, effective immediately,” that will be in effect until March, the Campus Reform website reported last week, citing a campus-wide email from Vice Chancellor Thomas Parham sent Thursday.

“After a thorough review, the student conduct investigation is now complete. The investigators found that Students for Justice in Palestine (SJP), the group that organized and led the protest, violated Student Conduct Policies regarding disruption: ‘Obstruction or disruption of teaching, research, administration, disciplinary procedures, or other University activities,’” the email said.

During the event in May, Jewish students attending the screening of the Israeli documentary “Beneath the Helmet” under the auspices of the campus Hillel had to be escorted from the scene by campus police after about 50 protesters gathered outside the film’s venue in a university classroom and made threatening chants.

The email also said the SPJ had a right to protest, citing its hostile actions and intimidation as reasons for the warning.

“We support and defend groups exercising free speech and assembly, yet we must protect everyone’s right to express themselves without disruption,” it said.

A police investigation into the incident remains open.