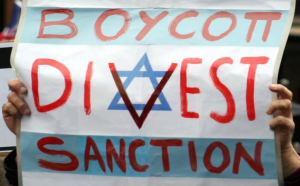 The UJA Federation of New York and Israeli Ambassador to the UN, thanks Governor Cuomo for directing state agencies to divest all public funds supporting BDS. “UJA-Federation of New York applauds Governor Cuomo for being the first governor in the nation to issue an executive order directing state entities to divest all public funds supporting the Boycotts, Divestment and Sanctions (BDS) campaign against Israel,” said UJA Federation of New York CEO Eric S. Goldstein in a statement.

“This executive order clearly demonstrates the discriminatory nature of BDS against the State of Israel and we are proud that the governor of New York State has taken this historic action to stand with Israel and reject the BDS movement,” he added.

Cuomo’s announcement came shortly before the annual Celebrate Israel Parade in New York. In addition to the executive order, he also said that he plans to put out a list of business and organizations that support BDS.

“Following last week’s ‘Ambassadors Against BDS’ conference and the unprecedented show of force against BDS, Governor Cuomo’s announcement is another effective strike against those seeking to harm Israel,” said Danon.

“America is Israel’s largest and most important ally, and the Governor’s initiative emphasizes this special bond. This is another victory in the battle against BDS and I am sure that more states will continue to join this fight in stopping BDS across the U.S.”