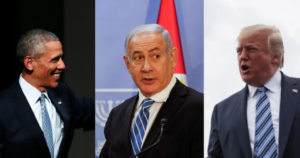 Israeli Prime Minister Benjamin Netanyahu addressed a joint meeting of Congress in Washington, D.C. to say that the ongoing negotiations between Iran and the United States would “all but guarantee” that Tehran will get nuclear weapons. Mar 3, 2015 – Screenshot: YouTube/PBS

A good, healthy relationship with the president, this argument ran, was necessary for a good, strong Israel-US relationship. When that was lacking, everything – all the doomsayers said – was on the verge of collapse.

Three days after Israel decided to bar US representatives Ilhan Omar and Rashida Tlaib from entering the country because of their BDS advocacy, three days after hyperventilated headlines and over-dramatic tweets, it is time for everybody to sit back and relax. This too will pass.

If the eight years of the Obama administration taught anything, it taught that the relationship between Israel and the US is deep, wide and broad enough to survive serious disagreements over policy, and a difficult and very critical president.

There is also the relationship with Congress; the military/intelligence relationship; the business relationship; and the historic ties between the two countries that extend even to a sympathy that America’s founding fathers had for the idea of a Jewish state.

Poll after poll continues to show that Israel enjoys extremely strong support among the American public. Granted, there is serious deterioration on the progressive flank of the Democratic Party. That is troublesome. It should be carefully monitored, and serious efforts are needed to address it. (One thing is for certain: those progressives who already dislike Israel intensely would not have liked it any more even had Israel let Tlaib and Omar conduct their bashing-Israel tour.)

She is either breathtakingly ignorant or a pathological liar.

Yes, you want a good relationship at the top, but even if that does not exist – as the eight years of the Obama-Netanyahu era proved – the relationship between the two countries can still thrive and prosper.

The same is true now. Israel wants strong bi-partisan support. But if it doesn’t exist at the moment, the relationship can continue to flourish and grow because the other components remain: a super strong relationship with the president, exceptionally strong military/intelligence cooperation, very close business cooperation, and still strong public support.

It is also premature to eulogize the bi-partisan support.

Despite President Donald Trump’s efforts to present them as the face of the Democratic Party, Omar and Tlaib do not represent the party, or the party’s position on Israel. They represent a faction of the party – a vocal and high-profile faction, but still a small one, and it should not be overstated.

House Majority Leader Steny Hoyer is not going to stop supporting Israel because it banned Omar and Tlaib, even though he called the move “outrageous.” Neither is House Foreign Affairs Committee chairman Eliot Engel, or senators Chuck Schumer or Bob Menendez.

There is more to the Democratic Party than the progressives, more to US public opinion than The New York Times editorial board, and more to American politics than Bernie Sanders. Are they important? Obviously. Are they the dominant trend? Obviously not, otherwise Trump would not be president.

In the important and necessary discussion over whether it was wise for Israel, under pressure from Trump, to ban the two representatives, perspective is needed.

We should enjoy it for now, and also trust that Israel’s value to the US will enable us – as we have in the past – survive periods when a less favorably disposed president may be sitting in the Oval Office.

Not too long ago, we were there, did that and – despite all the catastrophic headlines and apocalyptic prophecies – lived to tell the tale.