British MP: “It’s a fringe campaign that is…anti-peace, the government shouldn’t be directly or indirectly funding this movement.’

Member of the European Parliament: “It’s equally unacceptable a UN official should be promoting this event through his official email address,”

LONDON/BERLIN – A British-funded institute in Jerusalem has come under fire for hosting an event supporting the boycott, divestment and sanctions campaign against Israel (BDS), along with a UN staff member who circulated its details in an official email to co-workers. 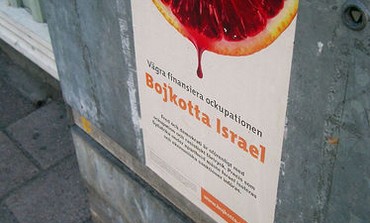 In March, the Kenyon Institute, also known as the British School of Archaeology, hosted an event titled “The emergence of the boycott, divestment and sanctions movement” – a campaign led by radical anti-Israel activists also known as BDS – at its East Jerusalem headquarters.

Charles Tannock, a Member of the European Parliament, told The Jerusalem Post: “I totally oppose the promotion, by a UK taxpayer-funded organization such as the British Academy, of events which aim to promote a ‘campaigning boycott, divestment and sanctions’ anti- Israel event which is aimed at sanctioning a close friend of the UK and a democracy such as Israel.”

“It’s equally unacceptable a UN official should be promoting this event through his official email address suggesting possible UN endorsement of this message.”

“The Israeli Foreign Ministry should raise this urgently with the British Ambassador to explain how this happened,” he said.

Pauline Latham, MP and member of the Department for International Development Select Committee, told the Post: “The British Government has been very clear that it does not support the boycott movement.

It is a fringe campaign that is inherently anti-peace, perpetuating divisions between Israelis and Palestinians and doing nothing to bring the two sides together in a compromising way.”

“The British Academy need to be able to ascertain how exactly its partners are spending their funding donations. The government should not be directly or indirectly funding the BDS movement and I hope that after further investigation this will come to an end,” she added.

The event was led by speaker Suzanne Morrison, a PhD candidate at the London School of Economics (LSE) and a supporter of the BDS campaign. For Morrison, an academic boycott of Israel is a “top priority in the BDS movement.”

Morrison, who lived in Gaza in 2005 and 2006, has accused Israel of intimidating “peoples of conscience” and said in an article that “while breaking the siege on Gaza requires more than delivering humanitarian aid, collectively the international popular movements represent a very real threat to Israel’s closure policy.”

She has also said that “what is clear by all these acts of popular resistance is that people of the world are prepared to do what states are either unwilling or too inept to do – break the siege on Gaza!”

The British Academy told the Post that it “supports a wide variety of academic discussions and debates in the UK and abroad.”

A spokesperson added: “We provide a forum on a range of issues, drawing on academic research, without endorsing political positions. The Academy does not support academic boycotts.”

The Post obtained an email from Ray Dolphin, an employee at the UN Office of the Coordination for Humanitarian Affairs (OCHA), in which he had circulated details of the event to employees at OCHA.

The source stressed that the motivation to release the email was to expose concerns over Dolphin’s anti-Israel activity stretching back almost a decade.

“There is a very specific kind of pretense at OCHA, in which they pretend to report and then pretend to let activists decide,” the source said. “What these emails show is that OCHA is burning the candle at both ends – generating the materials for anti-Israel activists and then amplifying [those] activists who use the materials.”

Dolphin, author of the book The West Bank Wall: Unmaking Palestine, which questions the necessity of the security barrier, told the Post that he regularly received emails from the institute and “forwards them in the office.”

He said he had “no idea who [Morrison] is” and that he did not support the BDS campaign.

Critics of Dolphin’s book said he presents a one-sided view of Israel’s security fence and the writing is steeped in anti-Israel rhetoric.

“As part of the BDS campaign, he repeats the exploitation of the term ‘apartheid’ to refer to the Arab- Israeli conflict, insulting those who suffered under the real apartheid regime in South Africa. His heroes include ISM ‘activists’ who fuel the conflict under the facade of ‘nonviolent resistance,’ and others who have destroyed the moral principles of human rights to promote the political war against Israel.”

In his introduction to the book, Graham Usher writes: “Israel has extracted submission from its primary victims, the Palestinians,” and “Israel could annex the occupied territories without granting citizenship to the Palestinians, resolving its native problem through a colonial apartheid regime of South African vintage.”

Dolphin frequently quotes the late Israeli sociologist Baruch Kimmerling, who says in the book “the greatest failures of the Israeli Left in the second intifada have been not to support the officers refusing to serve in the occupied territories, not to prosecute the Israeli state for war crimes, not to back international campaigns for sanctions and boycotts, and not to obey the moral ‘imperative which unequivocally states that occupying and subjugating a people, unnecessarily colonizing them, and robbing them of their land and water are profound sins.’” Dolphin wrote that his book “would not have been possible without the support of [United Nations Relief and Works Agency].”

“Yet again, the promotion of this lecture by a UN employee is an example of the UN improperly using taxpayer funding to promote the activities of a politicized private organization and anti-Israel demonization,” he added.

Amanda Pitt, spokeswoman for OCHA, told the Post that its activities are “governed by the humanitarian principles of neutrality, impartiality and independence.”

She added: “In order to advocate effectively it is our responsibility to keep well-informed on all issues that may affect the people we are trying to help. Sharing information internally on a particular subject or event does not imply that it is endorsed or supported.”

Her PhD supervisor is Dr. John Chalcraft, from LSE’s Department of Government, and is a vocal advocate of the BDS campaign. He has described Israel as a “heavily militarized, nuclear-armed, expansionist apartheid state with extensive illegal settlement, land seizure and wall building activity.”

Dr. Mandy Turner, director of the Kenyon Institute, told the Post that Morrison’s lecture was to “analyze BDS as a social movement.”

She said there was neither a video nor a transcript of Morrison’s lecture.

Turner declined to answer if she supported the BDS campaign but said her focus was “not on social activism.”

In a 2008 letter to the editor in The Guardian, titled “The Israeli ambassador is wrong,” Turner wrote: “With all focus on the failings of Hamas, Israeli settlement activity and the construction of the ‘separation barrier’ have continued unabated.

The reference to Iran as the mysterious secretive puppet master pulling strings from Tehran is a red herring. The only puppet master I see from where I am standing is Israel.”

Turner declined to answer additional Post questions about her and the institute’s work.

The website of the Kenyon Institute says it “is the home of British research and intellectual life in Israel/Palestine. As a British Academy sponsored institution, operating under the umbrella of the Council for British Research in the Levant.”

Michael Wilner in New York contributed to this report.