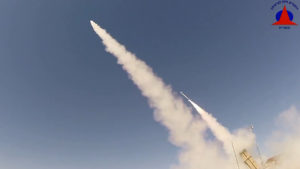 The technology will be used for command and control of a British air defense system called Land Ceptor and was developed by mPrest, a subsidiary of Iron Dome developers Rafael Advanced Defense Systems.

The British acquisition is part of a move by the Israeli company to sell the advanced system to the armies of Israel’s allies and NATO.

The acquisition is set to be implemented in Britain’s newly developed Sky Saber system, which is set to replace by 2020 the Rapier air defense system currently stationed on the islands to protect them from Argentina, who is in dispute with the UK over their claim to the archipelago.Two years ago, the British Defense Ministry decided to equip the islands with a £ 280 million defense package following an exchange of threats with the government in Buenos Aires.

The Falkland Islands are a group of 776 islands in the Southwest Atlantic. The total area of the islands is 12,000 square kilometers and its population is 3,000.

In 1833 the British Army took control of the group of islands and turned them into a British protectorate. However, Argentina has claimed over the years that the islands belong to it, due to their proximity to its shores.

In 1982 a war broke out between Britain and Argentina over control of the islands. The war ended two months later with Britain’s victory. In 2010, the struggle for control over the islands intensified after British companies began drilling in the area.

HMS Antelope smoking after being hit, 23 May – Photo: Wikimedia/Dmgerrard

A referendum in 2013 ruled that islanders wanted to remain under British sovereignty, but Argentina refused to recognize British control of the islands and raises a claim to its sovereignty over the islands at any meeting with British officials.

“We held an open tender at the end of which we decided to purchase the Rafael system,” a source in the British Defense Ministry said. “Their technology will provide us with the main computerized system that will connect our modern radar with the launchers of the air defense system to strengthen the protection of the Falkland Islands.”