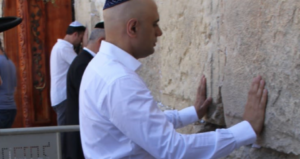 This trip by the British Home Secretary Sajid Javid to the Western Wall comes 19 years after the last British government minister visited that part of Jerusalem.

The trip by the Home Secretary comes 19 years after the last British government minister visited Jerusalem and the Western Wall.

Javid met with Director General of the Western Wall Heritage Foundation, Mordechai Eliav, who told Javid about the history of the place and its importance as the center of Jewish longing for Jerusalem throughout the generations.

Thank you for your leadership on banning Hezbollah and combating anti-Semitism.

You are a true friend of Israel and the Jewish People.

Javid, who comes from a Muslim family, said that his father believed in the connection between Jews and Muslims, and that his brother visited the Western Wall here as a child, inspiring Javid to visit. He also spent his honeymoon in Israel.

The Home Secretary is known as one of the staunchest supporters of Israel in the UK Conservative Party.

The minister added that one can sense the spiritual power in the place, and that he is impressed by the fact that the Western Wall is open 24 hours a day throughout the year.

Rabbi Rabinowitz told Javid that “Your visit here is evidence that in this small place Jews and Muslims can live together without harming each other”.

The minister concluded his visit by saying,  “We love Jewish heritage very much and appreciate it.”