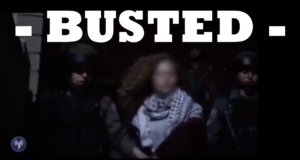 The young woman, identified as Ahad Tamimi of Nabi Salah, can be seen, along with other members of her family, pushing, kicking, and shouting at the IDF soldiers. Tamimi even slaps one of the soldiers in the face.

The Tamimi family has been known to harass soldiers in a similar fashion in the past, but no action has been taken to arrest any of them them until now.

IDF forces arrived early this morning to the family home in Nabi Salih and arrested Tamimi for investigation. 0404 reported that they also confiscated a cellular phone, cameras, and computers.

According to 0404, the arrest of other family members is expected in the future.