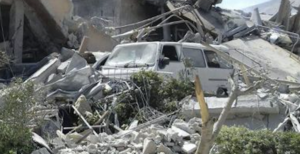 Aziz Azbar, head of the Scientific Research and Studies Center in Masyaf, also known by its French acronym ‘CERS’, was killed alongside his driver in the attack on Saturday night, Syrian and Lebanese media reported.

Azbar was said to have been struck whilst driving when a pedestrian reportedly attached a bombing device to the scientist’s car.

In its online version Al-Watan reported: “Doctor Aziz Asbar, head of the scientific research center in Masyaf, has been killed after an explosion targeted his car in the Hama countryside.”

The deceased was known for close ties with Syrian President Bashar al-Assad as well as the Iranian regime and according to British-based Syrian Observatory for Human Rights, the unit was being used for chemical weapons development.

The damage of the Syrian Scientific Research Center which was attacked by the US, UK & France, in Barzeh, near Damascus, Syria, 14 Apr 2018. – Photo: SANA (Official Syrian news agency) handout via AP

CERS has been the target of two previous airstrikes attributed to Israel, one in late April that killed a number of Iranians and another in July.

At the time of the July 22 strike that killed two Syrians, the Syrian Observatory confirmed that the attack targeted a “workshop supervised by Iranians where surface-to-surface missiles are made.”

“Iranian forces and forces from Lebanon’s [Shiite] Hezbollah movement are deploy in that sector,” head of the observatory Rami Abdel Rahman said at the time.

Israel has sought to avoid direct involvement in the Syrian conflict but acknowledges carrying out dozens of air strikes there to stop what it says are deliveries of advanced weaponry to its Lebanese enemy Hezbollah and other Iran-backed forces.

In April 2017, followed the chemical attack on the Syrian rebel held city of Khan Sheikhoun that killed 18 civilians including 5 children, the Trump administration placed sanctions of on hundreds of CERS workers.

The State Department also claimed sarin gas — thought to have been used by the regime forces in dozens of gas attacks — was being developed at the center, a charge vehemently denied by the Syrian authorities.

Syria splintered into civil war in 2011 when Assad’s regime violently repressed demonstrations against his rule during the pro-democracy Arab spring. In recent years, the government has slowly gained an upper hand against opposition rebels and global powers have backed away from demanding the dictator’s ouster.

More than 350,000 people have been killed and millions displaced since the start of the conflict.

(AFP contributed to this report)