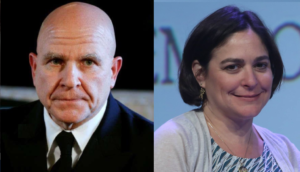 Many of you will remember that a few days before Trump’s visit to Israel, Prime Minister Benjamin Netanyahu – בנימין נתניהו and his advisers were blindsided when the Americans suddenly told them that no Israeli official was allowed to accompany Trump to the Western Wall.

What hasn’t been reported is that it was McMaster who pressured Trump to agree not to let Netanyahu accompany him to the Western Wall. At the time, I and other reporters were led to believe that this was the decision of rogue anti-Israel officers at the US consulate in Jerusalem. But it wasn’t. It was McMaster.

And even that, it works out wasn’t sufficient for McMaster. He pressured Trump to cancel his visit to the Wall and only visit the Yad Vashem Holocaust memorial — ala the Islamists who insist that the only reason Israel exists is European guilt over the Holocaust.

Glick noted that the three latest firings were not McMaster’s first attack on pro-Israel officials, or those critical of radical Islam. Two others had already been assigned to other jobs outside the National Security Council, she said.

Meanwhile, she noted, McMaster has replaced pro-Israel officials with anti-Israel, anti-Trump officials, and he allowed anti-Israel Obama holdovers to continue in their jobs:

[McMaster] fires all of Trump’s loyalists and replaces them with Trump’s opponents, like Kris Bauman, an Israel hater and Hamas supporter who McMaster hired to work on the Israel-Palestinian desk. He allows anti-Israel, pro-Muslim Brotherhood, pro-Iran Obama people like Robert Malley to walk around the NSC and tell people what to do and think. He has left Ben (reporters know nothing about foreign policy and I lied to sell them the Iran deal) Rhodes’ and Valerie Jarrett’s people in place.

(Malley was notoriously fired by Barack Obama’s first presidential campaign for meeting with the Palestinian terrorist group Hamas and advocating negotiations with them. He was later brought into President Obama’s administration to negotiate with Iran, and advised Obama — evidently poorly — on how to fight the Islamic State.)

Glick noted that “McMaster disagrees and actively undermines Trump’s agenda on just about every salient issue on his agenda,” including the Iran deal: “As for Iran, well, suffice it to say that McMaster supports the deal and refuses to publish the side deals Obama signed with the Iranians and then hid from the public.”

She also noted the irony that Trump had only hired McMaster, under pressure, because he was recommended by Sen. John McCain (R-AZ):

Finally, there is the issue of how McMaster got there in the first place. Trump interviewed McMaster at Mara Lago for a half an hour. He was under terrible pressure after firing Flynn to find someone.

And who recommended McMaster? You won’t believe this.

Senator John McCain. That’s right. The NSA got his job on the basis of a recommendation from the man who just saved Obamacare.

Glick expressed disbelief that Trump could fire former General Michael Flynn as NSA “essentially for nothing,” while allowing McMaster to attack Israel, and undermining the rest of the Trump administration’s foreign policy, with impunity.

She suggested that Trump replace McMaster — or else Israel might begin to reconsider its embrace of Trump:

If McMaster isn’t fired after all that he has done and all that he will do, we’re all going to have to reconsider Trump’s foreign policy. Because if after everything he has done, and everything that he will certainly do to undermine Trump’s stated foreign policy agenda, it will no longer be possible to believe that exiting the nuclear deal or supporting the US alliance with Israel and standing with US allies against US foes — not to mention draining Washington’s cesspool – are Trump’s policies. How can they be when Trump stands with a man who opposes all of them and proves his opposition by among other things, firing Trump’s advisers who share Trump’s agenda?

She said that Trump should not fear criticism for firing another adviser:

One source claims that Trump’s political advisers are afraid of how it will look if he fires another national security adviser. But that makes no sense. Trump is being attacked for everything and nothing. Who cares if he gets attacked for doing something that will actually help him to succeed in office? Why should fear of media criticism play a role here or anywhere for this president and this administration?

Glick added, wryly: “Obviously, at this point, Trump has nothing to lose by angering McCain. I mean what will he do? Vote for Obamacare?”