Despite unit commanders’ claims that celphones aid in field maneuvering, new order ban their use. 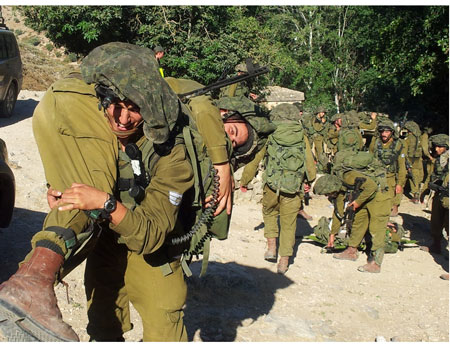 So far soldiers were forbidden from using cell-phones when on the field, and were only allowed to use it on the base’s premises, and only on their private time.

The new directive, issued by base commander Lieut. Col. Guy Berger, expands the restriction to the troops’ commanders, despite their argument that cell-phones aid them in coordinating maneuvers on the field.

But a top official in the Paratroopers Brigade backed the commander’s decision, and said that boundaries are important, and that commanders should be an example to their troops.

In addition, officers in the brigade noted that cell-phones pose a security risk, as soldiers who use them on the field jeopardize covert drills, sometimes even taking photographs.

Another issue is the brigade morale, damaged by soldiers glued to their screens, who neglect personal communication with the comrades at arms.

“It used to be that we would sit in the tent and everyone would talk about themselves,” an officer said. “But today to go on Facebook and don’t talk with their friends.”

“This communication sabotages important values in the shaping of fighters. I understand their difficulty to disconnect but this is the army and these are the rules.”

Limits to cell-phone use are not restricted to the Paratroopers, and the Navy has previously banned smartphones from its commands as well, by order of former Navy Commander Eliezer Marom.

But the Navy’s directive has since been changed, as it was found out that it significantly decreased recruits motivation to serve in the corps.

“We’ll have to deal with the issue without harming motivation.”