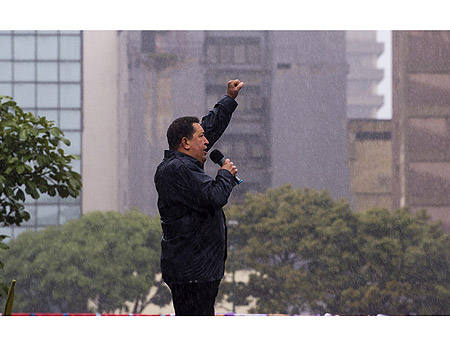 “I wholeheartedly congratulate you and the great nation of Venezuela on holding a passionate election and your renewed election as president,” Ahmadinejad told Chavez in a message published by the news agency.

Iran is ready to “increasingly develop cooperation” with Venezuela and bolster the two nation’s “joint regional and international goals,” the message said.

“This victory is another approval stamp on your leadership in the path of justice-seeking, and Venezuela’s development and progress,” Ahmadinejad said.

Iran and Venezuela are close allies who share an anti-American stand. Both countries have bolstered their ties through various security and economical corporations over the last few years.

Chavez was reelected as president on Sunday, for the third time. Since he was first elected in 1999, the Venezuelan president has paid 13 visits to Iran, while Iranian President Ahmadinejad, who is expected to end his term in office in 2013 after two stints, has made six visits to Venezuela during that time.