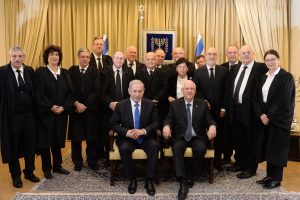 Chile’s Supreme Court rejected a Palestinian appeal to indict Israeli judges because there wasn’t any evidence to charge them as criminals, let alone war criminals or for crimes against humanity.

A complaint against three Israeli Supreme Court justices has been rejected in Chile for a second time.

The three – Former Judge Asher Grunis, Judge Uzi Feldman, and Judge Nil Handel – had complaints against them for their part in permitting the construction of the West Bank security barrier in the Beit Jala area.

The complaint was issued by the Palestinian Federation of Chile in November to the Supreme Court of Chile. It was issued as a private complaint.

Chile has the largest population of Palestinians outside of the Middle East, and are very active in Chilean society.

The claimants said in their complaint that the construction of the barrier constitutes a war crime and a crime against humanity. While the initial complaint was rejected in December, the Federation submitted an appeal, which was ultimately rejected on Tuesday.

This is due to the fact that that there wasn’t enough evidence to charge the judges as criminals, let alone war criminals or for crimes against humanity.

Justice Minister Ayelet Shaked (Bayit Yehudi) commented on the issue, stating “the Chilean Supreme Court’s judgment reflects the fact that they won’t use the Chilean court system for evil, and won’t promote political agendas which are pushed forward using law suits based on unfounded claims.”

“This decision presents a victory for the State of Israel in the worldwide legal fight against it,” she continued.