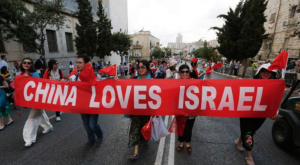 An Israeli delegation headed by Environmental Protection Minister Zeev Elkin is currently in China in an effort to bring together Israeli firms that specialize in green tech and Chinese companies looking to invest hundreds of millions of dollars in the growing industry.

The delegation, organized by the Environmental Protection Ministry, the Economy and Industry Ministry’s Foreign Trade Administration and the Israel Innovation Authority, is comprised of representatives from Israeli clean tech companies.

The visit by the delegation follows Prime Minister Benjamin Netanyahu’s visit to China in March, during which the two countries signed a series of bilateral agreements, including an agreement to bolster environmental cooperation.

Delegation members will meet with representatives from 160 local companies during two business seminars in Beijing and Nanjing. Initial agreements have already been drafted between the Israeli and Chinese firms ahead of the seminars.

“This is a tremendous opportunity that will significantly boost the Israeli economy. We can turn Israel into a leader in the field of environmental technology, just as we succeeded in doing in the field of high tech.”

During his visit, Elkin met with industry officials that plan to invest around $520 million in green technologies. In addition, the possibility of establishing a joint Israeli-Chinese center for the advancement of clean technology in China was also discussed.

Elkin and his Chinese counterpart Li Ganjie also signed a three-year plan for cooperation between their respective ministries. According to the framework of the plan, Li, along with a working team from China, will arrive in Israel in early 2018 to learn about the innovative environmental technologies as well as the government’s regulation of the industry.

Elkin is also working to advance environmental cooperation with cities and provinces in China. He has met with Wu Zhenglong, the governor of Jiangsu province, one of the most important provinces in terms of China’s economy, as well as the head of the Jiangsu Provincial Environmental Protection Department.

Following Jiangsu, delegation members will hold a series of meetings in Shanghai.