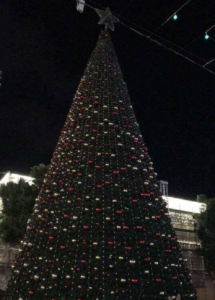 A large Nativity scene flanked by an unlit Christmas tree sits in the middle of a mostly empty plaza in central Bethlehem, known as the birthplace of Jesus, where Palestinians and a handful of tourists are celebrating the holiday amid tensions over US President Donald Trump’s recognition of Jerusalem as Israel’s capital.

Considering what’s happened to the Christian population in Bethlehem since the formation of the Palestinian Authority, isn’t Abbas at Christmas Midnight Mass at the Church of the Nativity (pictured above), like Hitler going to a Bar-Mitzvah? – Photo: REUTERS

A three-story sign hanging outside the city’s municipal office says “Jerusalem will always be the capital of Palestine.” A Palestinian youth group called Zimam are distributing red stickers echoing the same sentiment in Arabic.

“I don’t like to talk about business because there is no business,” the shopkeeper, whose store is filled to the brim with religious Christian paraphernalia, tells i24NEWS. He says that in a five day period, he is lucky if he makes 100 shekels (just under $30 USD) at his store.

Outside the store, street vendors hawking Santa Claus hats and headbands aren’t doing much better. “The municipality does nothing for us,” the shop owner says.

When it comes to Trump’s decision to move the US embassy to Jerusalem, he is skeptical that much will change. “It has an effect, but no one cares,” he says of the local community. “They protest and [then] they barbeque.”

“Only young kids throw stones,” he says. “This is business.”

Among the few tourists wandering the city are Lauré Mariage and Pierre Laffineur, a Christian couple from France. They say they came to travel the region and stopped in Bethlehem because of its religious significance. Despite being warned about the potential for clashes, they were nevertheless undeterred.

It is tourists that the city depends on, but they are few and far between this holiday season.

“No tourist [is] coming,” Joseph Adan, a local shop owner selling bags and keffiyehs, tells i24NEWS, “Because you think Palestine, you think conflict.”

Despite enjoying the highest visitation rate in the West Bank — Bethlehem accounts for nearly a third of visits to the West Bank — its economy lies at the mercy of regional strife and conflict.

Bethlehem already has the highest unemployment rate in the West Bank at 29 percent, according to the Bethlehem Chamber of Commerce.

Bethlehem relies heavily on its tourism industry to boost its economy. When people do get jobs in tourism, they are predominantly concentrated in two categories: food and beverage, and hotels. These two areas combined make up more than three-quarters of the jobs.

Of the 125 hotels in the West Bank, perhaps the most famous is ‘The Walled-Off Hotel’ — the brainchild of the famed street artist Banksy — situated directly next to the 26-foot-high, 440-mile-long, graffiti-tagged separation wall.

The Hotel’s proprietor Wisam Salsaa dismisses the idea that Trump’s decision has had an oversized influence on his business, or even on the wider regional economy. He instead attributes lower occupancy rates to the ‘dead season’ and says that spring and fall tend to be the more active tourist seasons.

Incoming tourism to the West Bank in the first half of 2017 actually saw an increase of 47 percent, as compared to 2016, according to the Palestinian Central Bureau of Statistics.

But after Trump’s announcement, many local businesses have faced challenges, as the clashes tend to dissuade people from visiting Bethlehem, and thereby contribute to the local economy.

Trump’s decision, Salsaa says, will have an impact “but not as much as the world expected.”

He is still skeptical that the violence will escalate further. “I don’t think a third intifada could happen,” he says, as it is contingent on the support of countries sympathetic to the Palestinian cause, such as Syria, which is mired in its own struggles at home.

He reiterates that Trump’s declaration “made no change,” as he says Israel is still building settlements.

Salsaa also says he understands how intricate the Middle East can be, and notes that wider regional instability may also impact Bethlehem.

“If anything happens in the region you feel it in Palestine, too,” he says.

Since Trump’s announcement on Jerusalem, the violence has escalated into Palestinian ‘Days of Rage,’ with at least 12 Palestinians killed in clashes, most of them concentrated in the West Bank.

Ethan Freedman is a reporter and producer for i24NEWS.

On Israel’s side of the border, a lighter note from Prime Minister Netanyahu!