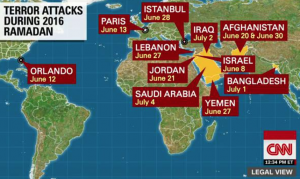 Updated map: This graphic shows the extent of terror attacks throughout Ramadan in 2016 https://t.co/bNYdnbaQ8Y pic.twitter.com/FT4dcpp24T

But the graphic does not include reference to several other attacks that have occurred within Israel and the Palestinian territories, including the fatal stabbing of a teenage girl in her bedroom and the murder of a father in front of his wife and kids.

CNN offered The Jerusalem Post comment to explain the decision of which attacks to include in the graphic.

“We included the attack in Tel Aviv on June 8 that killed four people, because, in line with the other terror attacks listed on the map, we felt rose to the level of a large scale, mass terror attack,” said Allison Gollust, executive vice president and chief marketing officer of CNN Worldwide.

“The other four that you mention, while of course horrible incidents, we did not feel rose to the level of Tel Aviv and the others on the map in terms of style of attack and number of casualties, which is why they were not included in our count.”