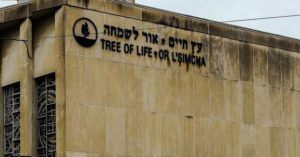 The heinous slaughter of Jews praying quietly in synagogue on their Sabbath is an abomination in every way. It is not just appalling because innocent people were killed, but that the murderer’s rationale was based on the hatred of Jews.

It is right and proper for society to prosecute the killer and explore ways to keep such crimes from happening again. What is not Okay is for politicians and the media to turn the tragedy into political points.

But politics has become a “win-by-any-means” endeavor these days, for the politicians AND the media.

CNN posted an article on October 29, 2018 called “The Pittsburgh killings targeted Jews — and America’s soul.” The important sentiment of the title hides the contents of the article which could have a sub-header “Republicans are the reason for hatred and murder in America.” It was an article specifically drafted to place the blame for the murder, and antisemitism in America generally, at the foot of the Republican party.

Some quotes from the piece:

Picture alongside CNN’s article on anti-Semitic mass murder showing a smirking
President Trump with a caption “Related Article: How Trump’s nationalism
has already changed the world“
Not a single Democrat was included in CNN’s list.

If it cared to be balanced and actually address the issue of antisemitism in political discourse, CNN could have listed any of the following:

Many current and recent Democratic officials and those Democrats running for office have platforms that are against or vilify the only Jewish country:

CNN opted to remain silent on every one of these Democrat’s comments.

CNN was clearly not looking to have a discussion about politicians fomenting antisemitism; it’s aim was to place the blame for antisemitism solely on the Republican party.

Perhaps CNN should look at itself, and its own reporters like Marc Lamont Hill, whom it describes as “one of the leading intellectual voices in the country.” Here is Hill’s video about his visit to Nazareth in Israel – not the West Bank or Gaza, but unquestionably Israel according to everyone except for rabid anti-Zionists. He refused to recognize the existence of Israel an called it “Palestine,” “a land stolen by greed and destroyed by hate… we stand by the people who courageously struggle and resist the occupation.”

CNN has become a mouthpiece for radical left-wing anti-Zionists, and it now lambasts Republicans as anti-Semites in a moment of Jewish grief. It is beyond pathetic. It is reprehensible.

Ben Shapiro nails it: He never refers to CNN by name, but CNN is exactly who he’s speaking about.