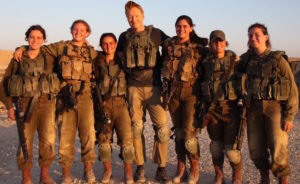 While there have been a lot of laughs, Conan’s also made some very serious stops as he makes his way through the Holy Land.

One was to Ziv Medical Center in the Galilee city of Safed, where thousands of Syrians wounded in their nation’s bloody civil war have been treated.

The fact that Israel and Syria remain officially at war was not lost on Conan.

“I am amazed and excited by what is being done here at Ziv for the sake of people from a neighboring country and an enemy,” he told the Ziv medical personnel, as reported by The Jerusalem Post.

Filming on the Syrian border where you can hear gunfire between rebels and regime forces. – Twitter:@ConanOBrien

Conan went on to state that if it were up to him, the Israeli doctors involved in this selfless, life-saving work “need to receive the Nobel Peace Prize.”

Several thousand Syrians, on both sides of the conflict, have in recent years made their way to the border with Israel, desperate for help and medical attention.

And Israel has been there to answer the call.